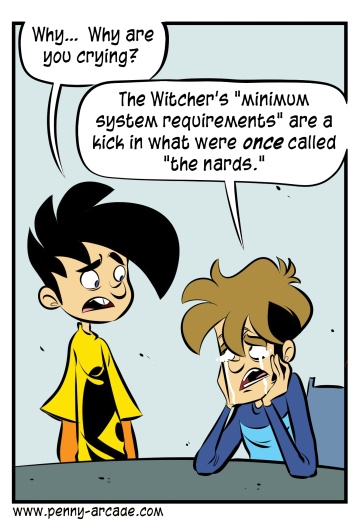 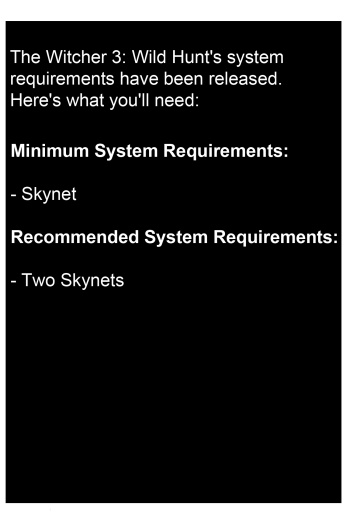 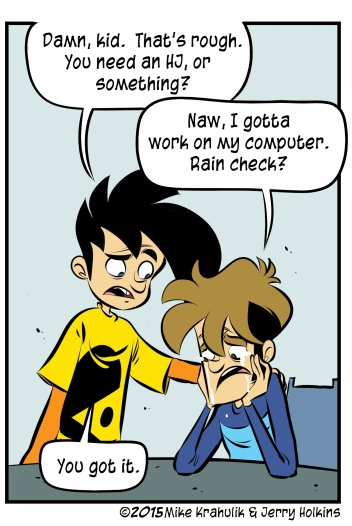 The Recommended System for The Witcher 3 is serious business, as you would expect; but even the minimum numbers resulted in a marked elevation of the left eyebrow. My home machine juuuust squeaks through. but I don't want to squeak through: I want to liquify this thing and DRINK IT.

I had a good cry about it and now I'm ready to be proactive. Of course, all this talk of maximum and minimum is held firmly within the parentheses of a gaming computer; the minimum hardware requirements are actually an Xbox One. Except I think I'm about to buy a videocard that costs as much as an Xbox One. Well, an Xbox One on sale, without Kinect. But still.

This is an old conversation. I could play it on the PS4 if I wanted - the reality is that the console versions aren't going to be fuck around times. I expect them to be brutal, deeply optimized excursions into the guts of those platforms. I just can't do it. I can't sit back for this kind of game, I have to sit on the edge of an office chair while the tangible universe around the hot rectangle of the monitor is systematically dismantled.

It's been a while since the Silicon Law was invoked, that law which compels one to step up their game game, and it's all happening at once over here. I needed a stick, sure, but Elite itself works great on there, so I thought I was kinda in the right place. Even if I hadn't felt compelled to make the device a worthy vessel for The Witcher, I'd just need to do it again for Cyberpunk 2077 which I strongly suspect won't have lower requirements.

So I feel the spur in my flank, yes; but I want to go where they're taking me? Does that put us on the same team?