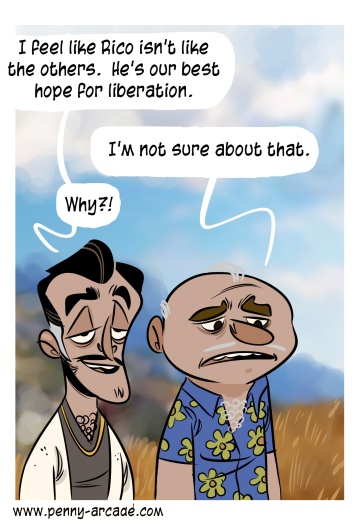 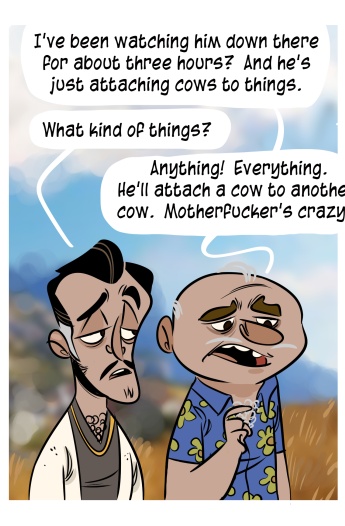 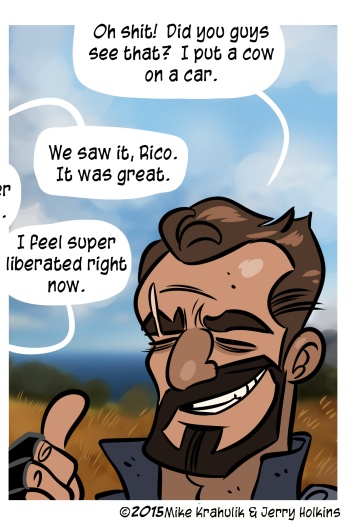 Just Cause 3, the game that launched a thousand streams, hasn't really been on our radar. There is always more than one game out when a Just Cause drops, which is inconvenient, and we've always been playing the other ones. But God Damn. I think Gabriil has more to say, but if you were wondering what his play loop could possibly look like, here you go.

I wanted to play Rainbow Six: Siege a couple nights before I said anything more than the most general, top level things. There's plenty to cover, though, even there.

I don't expect the game to be a success from a financial perspective, which I think we can all agree is one of the more crucial perspectives. The last time Ubisoft did something like this was probably Splinter Cell, which is to say they made new game and called it the name of an old game. I don't know if it Conviction "worked" as a retail artifact, by which I mean as a contributor of revenue, but I also don't care because it was a fascinating refraction of the original ideas. Rainbow Six has many traditions, going back to the first, some of which are mirrored in a modern form here. I expect it to be divisive both for series stalwarts and newcomers, which is to say, I expect a lot of blood in the ledger. Vegas made big changes, too, but all of them within the accepted shooter milieu, and with what I still maintain is the best cover system in any game, ever.

I have played a lot of Terrorist Hunt in my life, and I may be done doing that. The game's "situations" mode is a set of ten single player missions that are like a methadone meant to simulate a single player experience in the body. It rewards you with currency or whatever, and apparently there's an extra special bonus I won't spoil, but neither of those modes are Rainbow Six: Siege.

The rush of activity that begins each round is exhilarating. If you're attacking, everyone is racing little drones around and trying to find the objective for the match. The secondary objectives here are a) not to get your drone destroyed, and b) to leave the drone someplace where its stationary camera can be of use the entire match. If you die, you can use these drones to mark targets for the friends who remain, which is not a small thing - especially as teams get winnowed down.

If you're defending, you and all your friends are running around a house in the tiny amount of time you have left you need to prepare your home for incredibly dangerous guests. You are doing this while these asshole drones are underfoot and it's like man I have shit to do. You're making some walls impenetrable to ordinary breaching, or you're covering sightlines. Depending on your character, maybe you're deploying electronic countermeasures or distributing extra armor plates. Defenders who die can use the cameras in the building the way that attackers use their drones, but these cameras can be destroyed also. So.

A "map" means something very different in this game. Some games only have one map, like League or Dota, and that's plenty. Something I have heard a lot about R6 is that it doesn't have very many maps, though we have to remember that (like Halo) additional maps are free. Even so, a map where the objectives can physically move coupled with the ability of players to modify the space means that we need to look at that math in a different way. It's the difference between an entree and a buffet.

Rainbow Six conceptually has a single player campaign, and I miss that. Historically games have begun with single player, and added multiplayer; this went the other way around, and if we get another one of these I expect that to take center stage. But there's almost no way to describe the matches I had last night and the night before: having a plan and having to contend with the holes in that plan in real time is exactly what I want. There's no slack here. It's all taut. Rappelling through an atrium with a friend down into a stairwell. Pounding through a boarded window with a sledgehammer so my friends can pour into a second story window. The game is an engine for generating good memories.

It's also not safe in any way, shape, or form. Not as design, not as a business decision, and not as a moment to moment simulation. I can't even imagine what the curious player from another franchise is confronted with when they get in here. It's a shooter where the trigger pull is the least important part of the match.