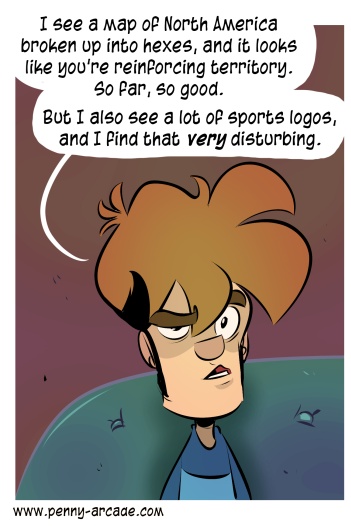 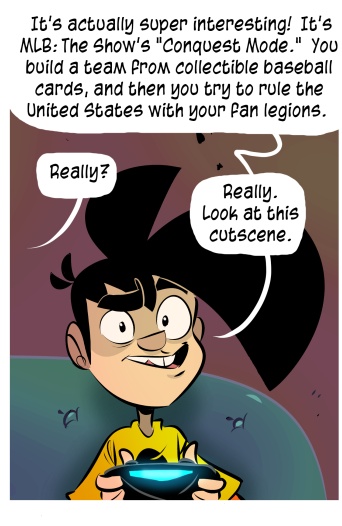 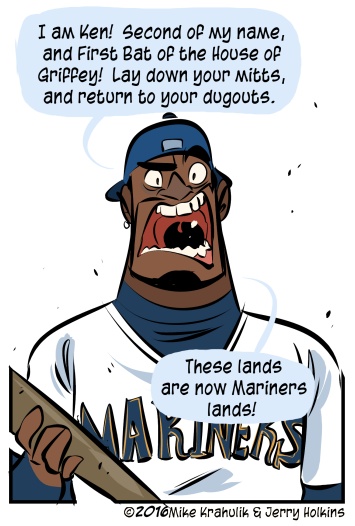 I have a thing I do with my brow when I don't believe something Gabriel has said. In a given day, I'm usually given many opportunities to perform this maneuver. Indeed, occasionally I'm still doing it when he says something else I can't endorse, which saves time in the transition.

He told me that MLB: The Show 16 included a mode where you, well, where you do what he says you do in the strip. Except it was ridiculous and insane for him to say that. Here's the thing: it was even more ridiculous for the them to have actually done so. God bless this team, yeesh. Check out the video, if you get a sec - the second half is about the mode, which sees you playing three-inning games as battles and yes I'm completely serious.

We have a strip coming up about it soon, but Gabe's Gear VR shell for his Samsung Galaxy 7 showed up on Friday, and we spent the day fucking around with it. I'd seen a prototype of Land's End (not the sweater place) on an early Gear VR at the first PAX Aus, and even in those early days it made case for itself. Obviously the big brother versions of these devices advocate for themselves quite well, but if you've felt like you could safely disregard this form factor as I did, we were both wrong.

I was telling Brenna about it, specifically how it is an evolutionary fork from the stuff I have in the office, and then her brain started to spin inside her skull and create language. She feels, and not without reason, that these technologies are isolating and therefore inhuman in some way. She doesn't think that a game where you strap yourself into a computer and pretend to work is funny. She thinks that is some cyberpunk bullshit and she wants to know how we can stop it before its too late.

But the form factor of the portable, the fact that it's based on so universal a modern totem as a phone, and the fact that it requires no external processing and is not attached to a trunk of cables out of the back of your head cranked her the fuck up for some reason. I think it started to change when I talked about watching Netflix on it, on a "huge TV," in some kind of chalet. She started talking about how such devices would allow us to occupy substantially smaller spaces while still satisfying our needs. Then we started talking about virtualizing real world objects like televisions and computers, where their meaning and utility was retained but they had no physical presence. Jesus Christ, it was hot.

I mentioned already that one of my favorite things about the Vive is the mystical gray limbo between other experiences. Nothing exists there except yourself, your hands, and the black boxes that project the beams. I like to think about what other useful things could be in there. There isn't a battery indicator on the controllers in real life, but there is a battery indicator on the controllers in VR. That's one of my other favorite things. We can improve physical things, virtually. We can make repairs.

Let me tell you a story. In the Vive, what you are in the real world maps to what you are in virtual space. Most games aren't like that: your height is predetermined, for example, and even if you change a bunch of superficial shit it's still the same spatial puppet in there. Homogenized. I'm not making a value judgment, everything else is built a certain way so they have to be able to make assumptions like that. But when my daughter Ronia is playing Job Simulator, it's hard for her sometimes because she's six and she is as tall as a six year old. So if she's a chef, let's say, she can't reach up to get the next order ticket - it's too "high." Yesterday, I had to lift her up in the real world to reach a virtual object.

So, yeah. An all encompassing, sense-hijacking goggle with disembodied hands is pretty out there stuff, and maybe it says this or that about our species or what we mean to each other. But you still need your daddy to lift you up to get something. I started to laugh and laugh and she could not figure out why.

Our Neighbors To The North