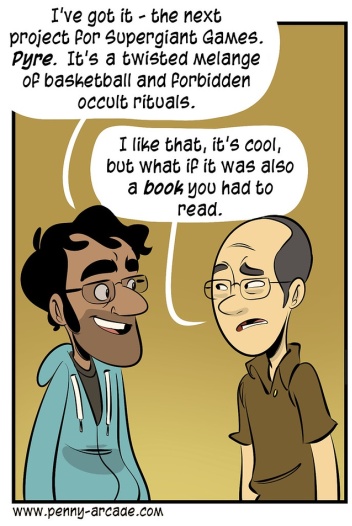 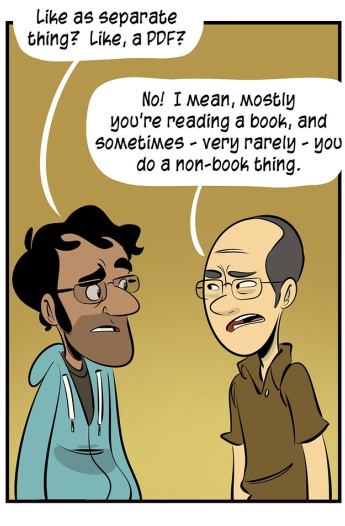 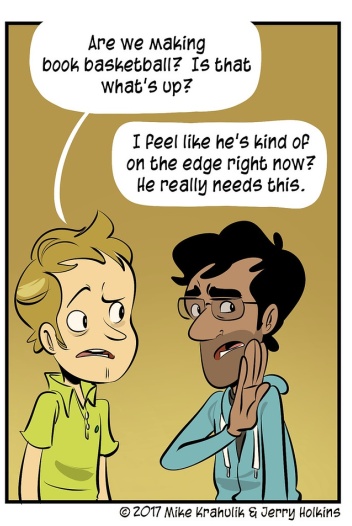 Pyre is… listen. Gabe watched a video on IGN and there was a lot of text and he got mad. We made this strip after. He and I don't agree.

I'm pretty familiar with the guys in this strip. I see them basically every PAX. Greg Kasavin, I mean… he's been in the strip before. I loved going to Gamespot and seeing his and Jeff Gerstmann's stuff. I've followed everything he did after, because he built trust.

William Gibson used to put words you couldn't possibly know in his books, words that didn't exist yet, and then you'd learn them observationally. He might render out a word based purely on its pronunciation, which leads to the same confusion in the reader that a listener might experience. His work also represents the first time I ever saw the word "unfuck," meaning "to fix," so I gotta love him. There's a puzzle in the language and reading the book is about becoming a citizen of the future.

That's not the challenge Greg is up to here - he has to write it like you already know. And you do, because anything you should know is highlighted text, freighted with metadata. You're never lost in the profundities he presents because you are someone who knows things. You're never made to feel dumb. In fact, you have one up on everybody. Even the act of reading the text in the game is made part of the story. These ideas are massive. I don't want to tell you shit.

There are wrong words in things all the time. It's simply a fact. I feel a wrong word like I feel an itch on my left temple. I haven't seen - that is to say, felt - a single wrong word yet. The case being made for this world is self-evident.

As for the Wizard Basketball Rugby RPG, it's gonna take me a while to understand that all the way. I know that I want a turn based version of it, optimally to play on a table. I also know that I want this, like I want all games, on the Switch. I'll hit you back on this part. Sometimes I'll stop playing a game because the act of playing it means that there is less of it to play. I'm not saying it makes sense. But I've done it once already.