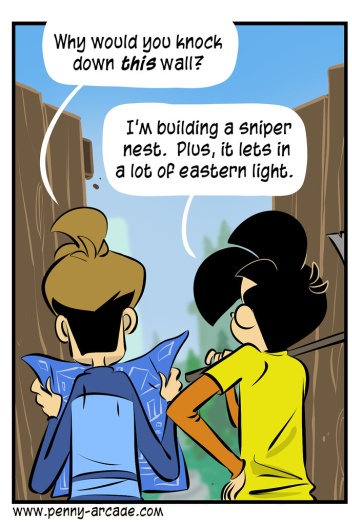 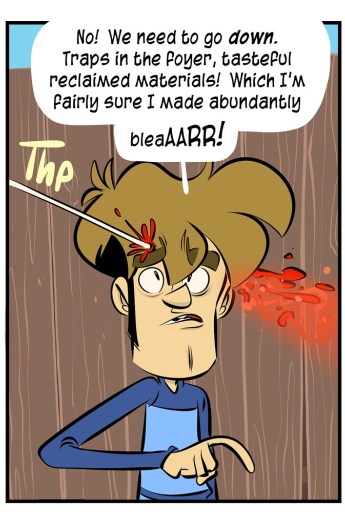 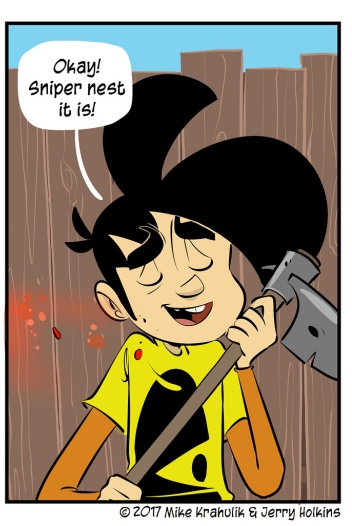 Gabe has managed to spread this Battle Royale disease to Kara, and it infected all the people I used to play Destiny with. I've told him repeatedly: this is not the cool game to play. He doesn't have the receptors to collate this kind of data. So if I want to play a game with… anyone, I'm playing this.

Gabe and I found a very nice house with a very nice view, right in the middle of the circle, so we thought hardening it might be a strong play. What this meant as a course of action was very distinct for each of us, and we both set about doing opposite things simultaneously, which lead to the strip.

Last night the rest of the crew was in a four player squad, so as the free electrons Amy Falcone and I jumped in and very discovered how swiftly death could arrive, gliding on black wings.

(There's always a moment of hesitation when I refer to Amy Falcone as Amy, because I more or less had to overwrite the mental entry for her with Walnut Dankgrass just to escape brutal glares. There are as many ways to play D&D as there are people, and she is the type - I didn't know this before we started playing - she is the type where if you say her real, human name during the game she'll try to kill you with her eyes and words.)

Battle Royale has a slapstick quality that, at least for me, makes death a little funny. And even if it wasn't super funny, I still made a cool house with my friend. I don't know. I still want to know how serious they are about all this. I want to know if it's safe to love again.

I was going to suggest that it might be difficult switching between these games for this afternoon's PUBG stream with Kiko, but I am someone who has never known the taste of bird. Ask my Nightbot, it'll tell you. If my performance were to suffer - I just chuckled a bit - how would anyone know?!?