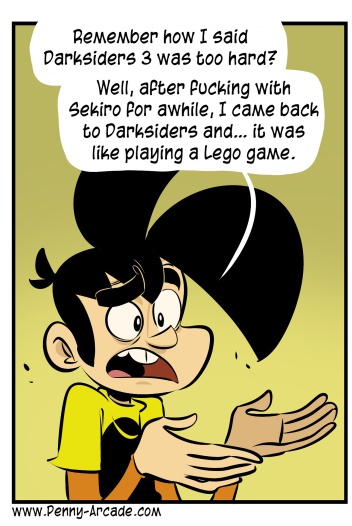 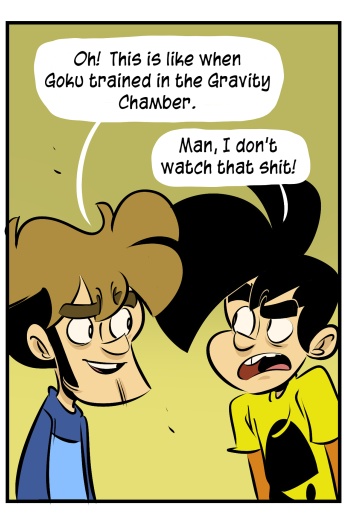 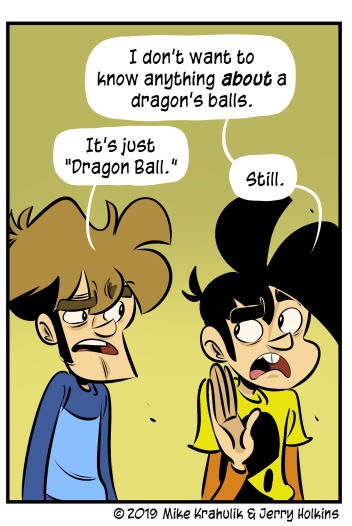 Gabe's been playing the original Darksiders on Switch and Darksiders 3 on PC, the PC of all things. I'm always going to be a partisan where gaming PCs are concerned, but even for me 3D action platformer type shit isn't something I prefer on there. The case he's made to me, and I think it is a good one, is that you have HDR and 4k on a console, which is being spread over a massive screen - all thin, sort of stretched, if you know what I mean: like butter that has been scraped over too much bread. Then you have the same thing on a monitor right in front of you, a density of content coupled with the fact that everything else being equal the PC simply endures more effects, more ground cover, so that I can be impressed with what's happening on a television but I can be transported by a smaller screen.

I am The Person Who Saves Money When Buying A PC Via The Purchase Of A Shitty Monitor, but after I saw what HDR looks like on a good PC I'd replaced the monitor two days later. Once you've seen a strong implementation I think HDR ceases to be optional. It's hard to know what the metaphor is here exactly, because it's something that your eyes and brain just… know. It's processed before mind can marshal its forces. Put simply, there is more information per frame - information that tells the rest of a story the mind labors otherwise to fill in. You aren't even aware its performing this labor until it doesn't have to do it, and if it possible to feel the brain exhale, I believe I have done so. Right now I'm playing a game that is mostly about reminding citizens that the government has a monopoly on violence, but I gazed into the ineffable contours of a smoke cloud illuminated by a bank of standing lights and I got real quiet for a spell.

The rest of the conversation we had was about the difficulty of Darksiders 3 - I remember when we installed it, right after it came out, and he fought the boss and died for a reason we didn't completely understand timing wise in what must be considered the most rudimentary room in gaming circa 2019. The question then was whether or not to continue whipping ghosts in this featureless self storage unit or get teriyaki and we got teriyaki. Coming back to the game now, they've added a "Classic" combat mode since then that's made the game feel the way he wants it to. That, coupled with his novel regimen, gave him access to Darksiders 3, a game he had consigned to oblivion. Which, on brand though it may be, was probably not its creator's first choice.