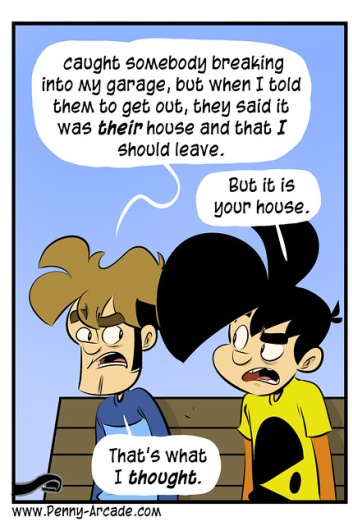 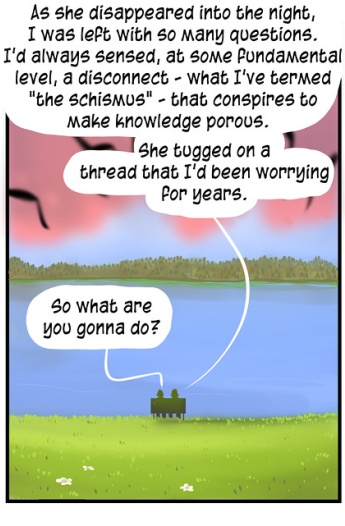 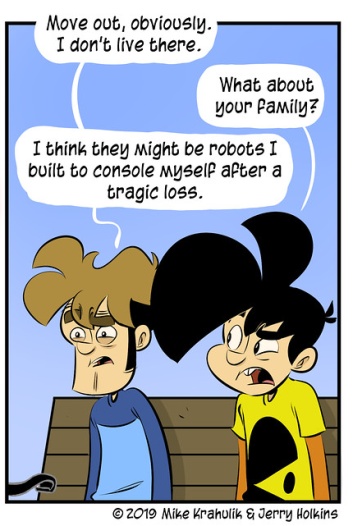 I'm fucking losing it over here. This happened when I got really into Warmachine, and then life conspired to alter the level of enthusiasm I could invest in people who were less than two or three inches tall. But some of those limitations have evaporated and now the sort of competition and simulation… hang on. Let me go back. The kind of focus these games offer as a hobby is completely unlike anything else. It's akin to being able to craft an entirely custom god and then spend your leisure hours worshipping it. Oh! And you also get to set you god against somebody else's god without the usual problems associated with that sort of thing.

But, yes. Like the strip that will appear on Wednesday, a tale of confronting a thief in your garage, this even more harrowing tale is also drawn from real life.

We've been playing Wargames on the stream most Tuesdays - of course, not this Tuesday, because I'm fuckin' mentioning it - playing rounds of Warhammer 40k: Kill Team with the armies we got in the starter box and goosed with some strategic purchases after the fact. We also painted them on stream, partly because it's cool to see, but also because it's not something I'm comfortable with really and I think it's important to show that, too - and that it shouldn't keep you from this amazing type of play.

I would say the game I've played most in the last few months, and it's not even close, is Tabletop Simulator. I mean, pursuant to the topic at hand. I play a lot of games on there that are difficult or time consuming to enact in real life for a variety of reasons, games I've been meaning to try for ages, and it's the lion's share of what I wanna do when I sit at the computer. It's a mess in some ways, like reality in that respect, uncouth with pointy elbows, and the Steam Workshop for it is functionally a bazaar of deeply stolen goods. I have a lot of thoughts about it that I can't get to today, because I'm actually in the woods and this was written days earlier. I'll try to approach it Friday if I can. I have a lot of feelings about it, because it's a "place" where I spend a lot of my free time.

I haven't had a chance to check it out in VR, and I would say generally if a program gives you the choice of using it in VR as well as using it in some other fashion, it hasn't received the kind of attention that would make the virtual experience worthwhile. But a "game" about manipulating virtual objects in a pretend place might be that rare case where it actually makes sense.