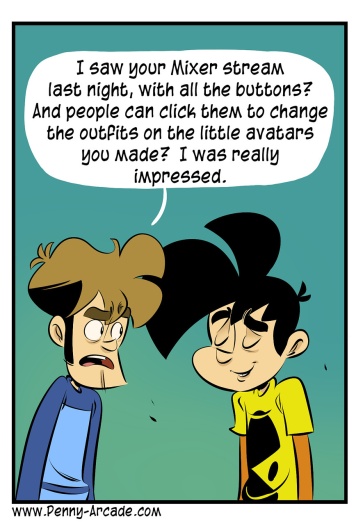 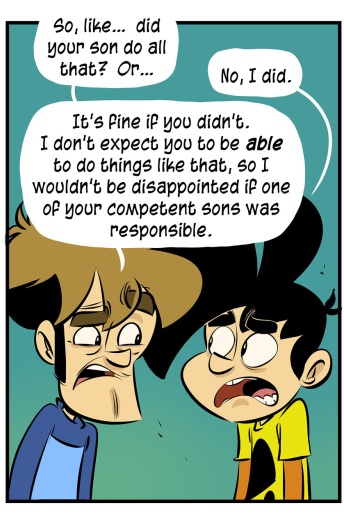 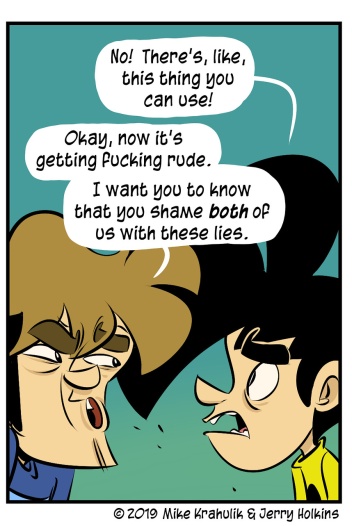 It's actually true that there is a thing you can use, specifically, a gridded interface you use to place interactive elements and define their behavior. I'm not saying that to diminish his accomplishment; if anything, it's to laud them for theirs. But he has a history of discovering some new concept and then effortlessly mastering it in a way that is profoundly annoying.

Do you remember when Flash was a thing? I mean, obviously Flash is still a thing, like a haunted stump is a thing, but Flash was creating a Web for a little while there that was more like The Future and less like a phonebook that required thousands of dollars to access. I came back to the apartment from work one day, and before I knew he was even interested in Flash he'd made a massive, interesting site in it which was one thing but he'd also perfectly cut a bunch of audio loops as well, which I considered my thing. So I was mostly mad.

When we first made this site twenty years ago, Gabe handled all the art and I handled the HTML - I learned how to make a table for just that purpose. But I arranged things in a way that stretched it out because the menu items are all one one side and there was just a fallow field on one side. That hole - then a material one, now a conceptual one, I filled for no other reason than that gap. I can't stress this enough: I have written an article to accompany the comics for twenty years just to avoid learning something.

He's over at his desk now, drawing crops on his iPad pro - "stream crops" you'll be able to click on to water, grow, and ultimately harvest with Sparks. You can also build a little house around the avatars he's made already. By comparison, I learned a cool word over the weekend - but I've already forgotten it.

My friend Armoire, who you may know, falsely, as Amy T. Falcone, will be joining me on the (Twitch) stream this Afternoon to excavate some Dota Underlords. Apparently they're way, way down there.