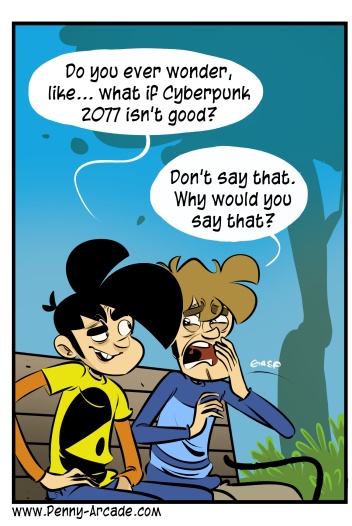 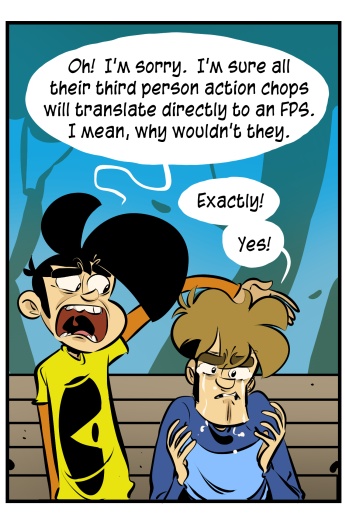 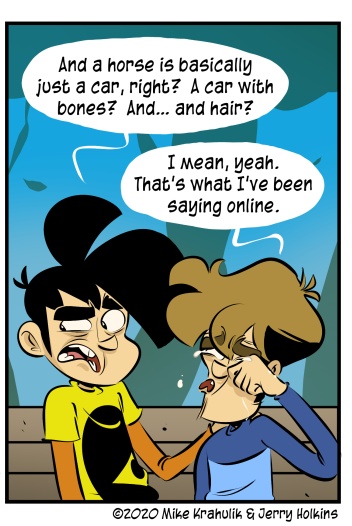 When we were trying to figure out the strip today, this fucking monster tried to kill the only hope I've allowed myself to hold onto for this, the dumbest year.

If I'm being completely honest, having played and completed all of the Witcher games, it's not actually the "gameplay" that is the big draw anyway. It's a combination of the art, music, writing, and performance that is executed to such an unparalleled degree that I am happy to get through this or that fight or - as was the case in the second one's intro - die probably fifty times to dragonfire before getting through it.

I don't really think about anything mechanically in The Witcher 3 this many years on except for the really heavy armor I got at the end. It seemed really warm and I had to work for a bit to get it. I think about The Bloody Baron or The Best Trolls In Any Game or The Last Wish or The Best DLC Any RPG Has Ever Received or Triss. The cool thing about the swords in The Witcher are that he has two of them. Beyond that, I'll push whatever buttons they want me to so I can live in the terrible places they've built and be a very, very small light.

Right now, Dabe - who you may know as Dabriel - is leveraging the channel for his own terrible purpose, unraveling the mysteries of The Oldest House in the AWE expansion for Control. Later this afternoon, specifically at 2pm PDT, Motorsport Manager returns - and at a crucial moment for Gabir Motors, proud member of the Dragon Race Team China family. After his incredible P1 finish at the end of the first season, Hong Liao has been sent out to the grid with something that looks very much like a car from the outside, but inside is a random assemblage of things people brought from home. Where a traditional F1 car might have a Front Wing or Brakes, a typical Hong Liao platform might have a piece of tape with the word Wing written on it and the void inside the body filled with Pirate's Booty rice and corn snacks. After weeks of urging from the Pit Crew, management decided to give the embattled Liao a vehicle that meets the barest definition of a car - and he delivered First Place. He was joined on the podium by Enriqua Lara - The Laraiathan - in Gabir Motor's first ever double podium finish. This week, Vasily's new project is coming up the lift - an engine, an Archimedean marvel that is as much his child as Lelyah or little Misha. Who will get it? And will this war over who is the favored child strengthen their bond as teammates, or will it be - as XBC journalist Luke Finlay-Maxwell has suggested - the return of a burning rivalry not seen since Senna and Prost? I swear to God I'm talking about a game where you manage a pretend racing team, somehow. Join us today at 2, and keep Dabe company in the meantime.