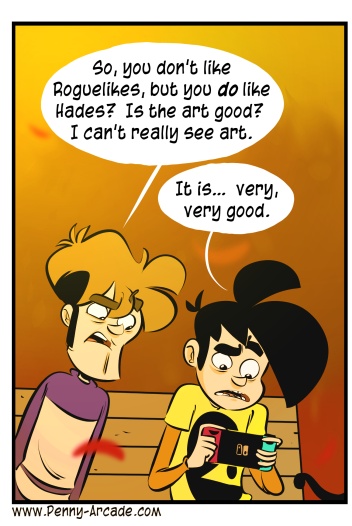 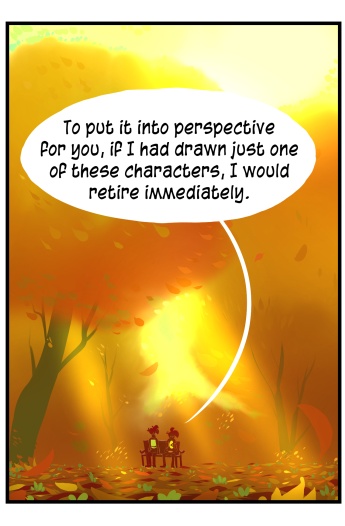 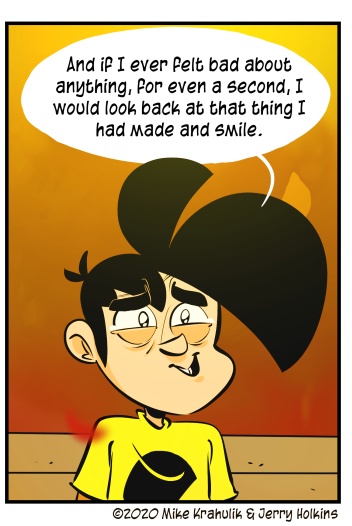 Hades is real good. This is a fact in evidence, and I'd talk about it way more if I didn't consider a couple of the people who made it not even friends but, like… allies. I would spend more time praising them if I didn't know them, which is its own counterproductive dynamic. I'm actually in a position to know how much they give a shit about what they make, products which strike almost unerringly, and that's what keeps me from doing it. You could certainly argue that I've spent this paragraph doing the opposite of what I've just said, but I'd prefer it if you considered the whole thing couched in a kind of ironic performance. It can only help my case that everything I've said is absolutely true.

This being firmly established, Michael doesn't know them so he can draw whatever he wants.

A Roguelike is a type of game where you can get incredible use out of a base set of assets, but Hades got confused because not only did it make a game about the Sisyphean genre while also being its exemplar, they also recorded a profundity of unique, context aware, fully voice acted observations on itself obviating any potential savings! Silly geese, the lot of them.

It's a big day for Gabir Motors, proud member of the global Dragon Race Team China family. Newcomer Enriqua Lara - recently dubbed Tiamat - and veteran driver Hong Liao are masked up, granting careful interviews. Reserve driver Bao Tang waits in the shadows of the paddock, rhythmically slapping a golden wrench against his palm. The stakes have never been so high: we claimed we'd get Number One this season, and after requesting a pool's worth of money to fill our recently constructed Money Pool, Chairperson Bo Chonglin intends to hold us to it. It's an all or nothing final race of the season that will lead either to our Ascension, a glorious move to the next league, or our decapitation in the parking lot. It all happens at 2pm PDT today, only on Twitch.