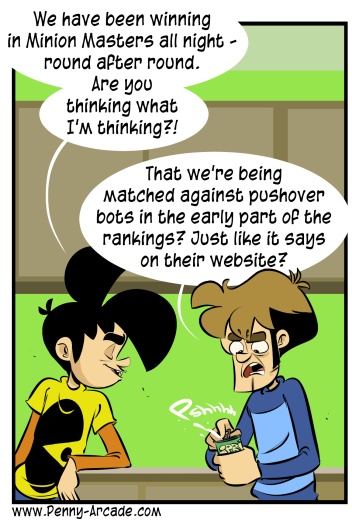 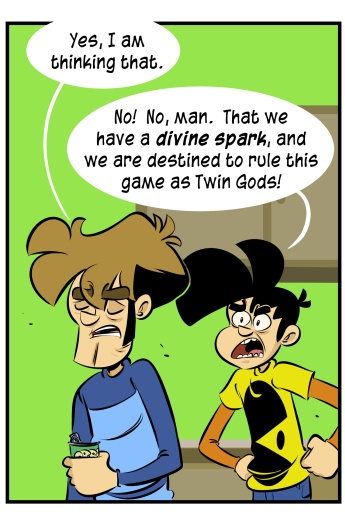 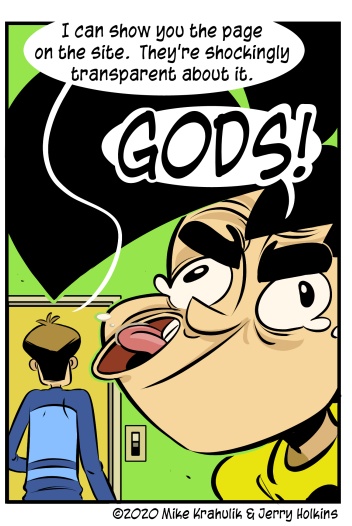 I have coming up on fifty hours of Minion Masters, which may not seem like much - as I understand it, there are much larger numbers - but when you take into account the fact that a round of the game takes a few minutes at most, it's an incredible amount of play density. It's a deckbuilding strategy game similar to Clash Royale, except where Clash Royale maintains the MOBA concept of Towers, you're essentially going face with every unit you send over - hindered only by the units you've placed in their way. I'm back now after a long hiatus, and I expected to get fucking trashed, but (at least here in the genteel Platinum rank) it's still possible to play your way out of serious jams.

Deckbuilders you can play with a teammate are a particular fascination of mine - Hero Realms in 2v2 is a revelation, for example - but the dynamics of Duos in Minion Masters are a delight. With two mana pools and two ten card decks, figuring out what kind of arc you want to have collectively in a round is a game. Independent of everything else! It reminds me of being in a Chromehounds lobby sometimes, soliciting feedback, working toward some unified tactical shape. I told Gabe it would be fun for he and his writhing larvae, but what happened instead - indeed, what I never dreamed - was that we ended up playing it together. And, like… decapitating motherfuckers. Who might not even be real motherfuckers in some cases, they're clear on this point. They're currently in the process of bringing the game to mobile, where on a big enough screen I think it would kick ass - but the hope is that a lot of this polish work to bring it up to code for mobile benefits the other platforms ultimately as well. If Gabe and I both like a game, there's probably something down deep in it you should check out.

Oh! Purely as a housekeeping note, we're investigating ads on the site again. I seem to have found somebody that won't serve weird scripts to readers, which has the scent of progress. Because I hail from another era of Internet publishing, there are certain classes of ads that I'm uncomfortable with - of course, these are the most lucrative ones. So there's gonna be some experimentation in terms of ad sizes and placements to figure out what works best, but just as before if you would like to make such creatures disappear Club PA (in addition to its other manifold benefits) will devour them for you.