Even with a planet-a-day Kotor habit and now God Damned Mario Golf there in the Cube, the production of marbled, USDA choice comics is our chief concern. You could say this strip was co-written by Suzanne Vega, which is even sort of true. 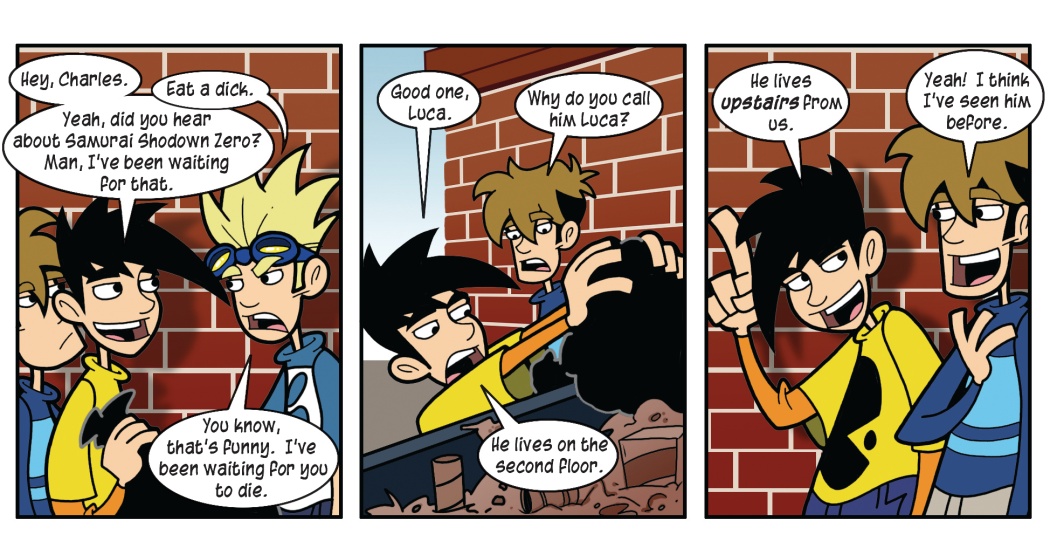 Part of the reason Samurai Spirits Zero has such a hold on us is because the Samurai Shodown series contains the first games we ever played versus. It would be fair and indeed quite accurate to say that Penny Arcade owes a great deal to the Shodowns Samurai sometimes find themselves embroiled in. Penny Arcade also owes a great deal to Captain Immy's Pointless Audio, Broccoli Beef, and Kool-Aid, though explaining the particulars of those associations doesn't interest me - let alone you.

As regards Mario Golf, please don't be without this game. I had my doubts, even considering the pedigree, because I felt that modern Golf gaming had reached a new level that I wasn't ready to return from. I don't know if you've played Tiger Woods or seen the demo of Links they had at E3, but you use the analog stick to swing the club. Just that element - pantomiming the virtual action - adds so much to the experience and strategy of the game that I wasn't sure I'd ever want to be without it. There's nothing like that in Mario Golf, but it's so elegant in all respects, so visually appealing, and so fucking fun the entire time to you play it I'm going to let it slide. Gabe gets his Internet back tomorrow I believe, and where I have an interest in Golf he has more akin to a full-blown mania. I'll let him take you into the nitty and perhaps even the gritty.

Aside from that, which is irresistible, I'm bullish on RPG at the moment. At the San Diego Comic Con, Atari had a booth showing a playable version of The Temple Of Elemental Evil that put a fishhook through each cornea and pulled both eyes out of my face. I'm enjoying Kotor on the Xbox, but what it's made me do is pine for a new golden age of role-playing on the PC. I had to stop myself from going over to the Atari booth on every break I took, just to right click on something and see the most amazing radial menu bloom from a player character. I'm waiting for Etherlords II, which we'll see in about a week, and I downloaded that demo of Lionheart to see how Fallout's SPECIAL game mechanics would work in a fantasy setting. I don't really know how to feel about it, and I'd appreciate hearing your opinions on the game - I've just reactivated my e-mail after a long hiatus. It's too early to say anything conclusive about it, at any rate. If I'd just jumped on the site here and talked about Knights of the Old Republic in the first hour of play I'd have some pretty nasty things to say about it, too.

We're supposed to go to Microsoft today and check out Counter Strike and Crimson Skies, the latter of which I have spoken of in this very space with much passion, if not brevity. I hope the guys we're supposed to meet still work there.

just don't ask me what it was