In days of old, I established the parameters of Gabriel's affection for RPG in a two strip series entitled The Cycle. He has been my project in this regard, a sort of rogue protege, but until a game came out that combined Star Wars and role-playing my lessons never took root. Immediately after Knights of the Old Republic, he started playing Final Fantasy X, then he moved on to Final Fantasy IX, and now - joy of joys! - he's moved on to the tactical battle game everyone seems to love, Disgaea. Not only is he playing it, he beat me to it. I'm trying to figure out if that makes me mad or not. 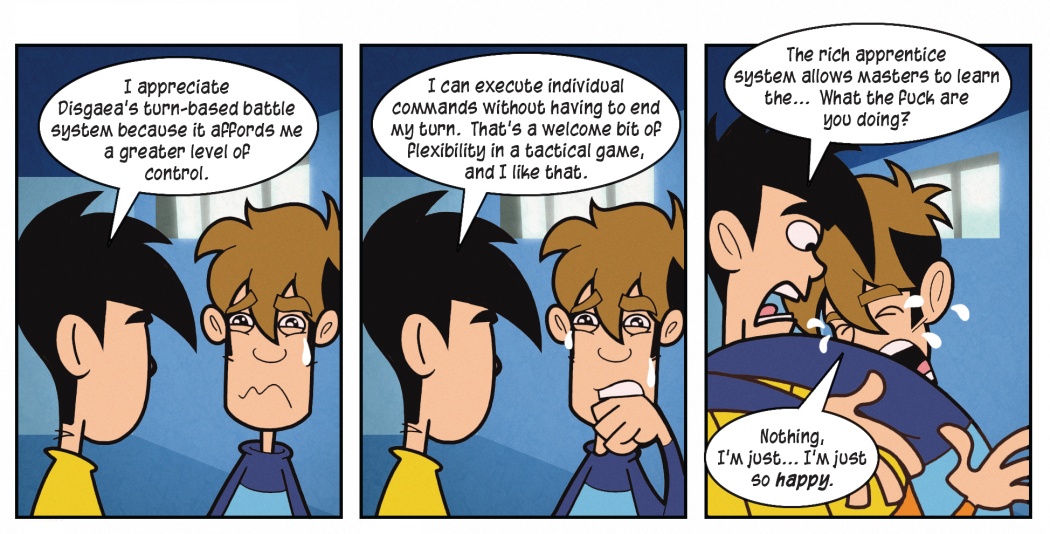 I've heard people complain that Valve's Steam won't allow them to play their games on a LAN, which I suppose is a real issue for some people. I guess they're working on a solution to that, but they can take their time as far as I'm concerned - the LANs I go to have Net access, I wasn't aware that was such a luxury. My problem with Steam is that up until Yesterday, it didn't fucking work. So if we're rating these problems on severity, I win.

Any time I get a chance to, I extol the virtues of digital content delivery. What I'd like to do is allay your fears about Steam so you'll agree with me, and then I'll be right, but I could not do that with a straight face. What Valve's recent Steam launch proves is that the concept works great, as long as nobody wants what you're delivering. It was in every way reminiscent of the Chernobyls that accompany the release of an MMO, except that Massively Multiplayer games aren't gong to try and squeeze out a gig to each player. Massively Multiplayer games also don't start out with this kind of inherent userbase. Despite their best efforts, I don't think it could have gone well - Valve is yoked to the largest action playerbase in the world. Two points:

I thought this was a brilliant concept when I heard about it, because if it had worked I'd imagine things would have gone a lot smoother. People who download Steam aren't exactly indifferent to the Half-Life engine or the mods that sustain it. It is a fair bet that a huge percentage - if not all - of the people who use Steam have Half-Life plus mods somewhere on one of their hard disks. What the content migration facility was supposed to do was take those files you already had and transfer them directly into Steam. That means people don't have to download a gig apiece from beleaguered servers on the first day, which were already in the throes of a data apocalypse. What percentage of that impenetrable load the first two days was due to failed migrations, I couldn't tell you - but I do have the trick from the FAQ I used to get going. Inside your Steam folder, there's a folder called SteamApps, and inside SteamApps there should be a folder named whatever your e-mail address is. If you make a folder inside that folder called "Half-Life" and copy (or install) mods straight in there, they'll show up in Steam under "Third Party Games" and you'll be ready to go. I was just going to link to their FAQ, but their site is broken right now, which I appreciate because it basically vindicates my whole shit. You can see now that they put up a new installer that includes Counter-Strike 1.6, instead of having to get it through them. It was a good idea, even if it does establish their culpability in these failures.

Maybe Content Migration worked just fine for some people, but it didn't work on either of my machines. And every machine it didn't work on represents more load on a system already trying to cope with distributing the most popular game in the world.

2. It doesn't make any difference why it was fucked up.

It just doesn't. That's not the future of content delivery, it's the future of fucking pissing me off. I can't be the only one who was using the Steam launch to determine how my Half-Life 2 install would go when I bought it through their service, and it seems fair to assume that HL2 is going to be a damn sight larger than Counter-Strike. Oh, I'll still try to get it online, because I am stupid and I think that each day will be brighter than the last. My only comfort in this matter is that enough people will be scared off by either this experience or an overall distaste for electronic delivery that I'll be able to get my stuff. Now that's confidence.

I had all these Half-Baked theories about how Valve would still deliver HL2 on the thirtieth as claimed, because it would be a Steam only release that didn't necessarily have to jibe with the release dates we were seeing from retail chains, with Team Fortress 2 as an incentive... I don't know why I invested my mind in creating excuses for them, but they need to start communicating with gamers about when and why things are happening.

where is the victory 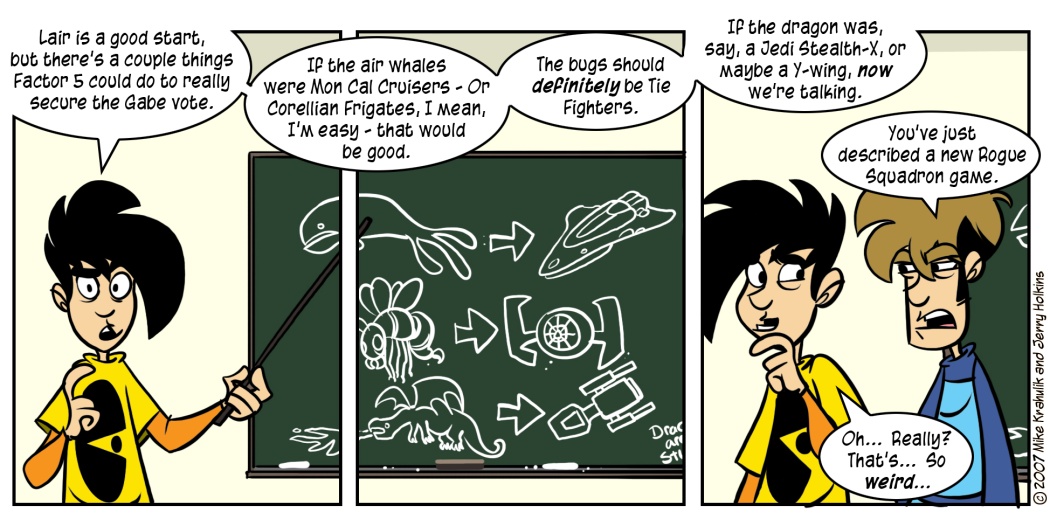