The claim that I was actually good at my telemarketing job was made primarily for your amusement, and is not informed by actual events. Even if I were good at tricking people over the phone, it wouldn't be the sort of thing that generates pride or should be publicly announced. In reality, working there produced a scenario that was almost inconceivably melodramatic. 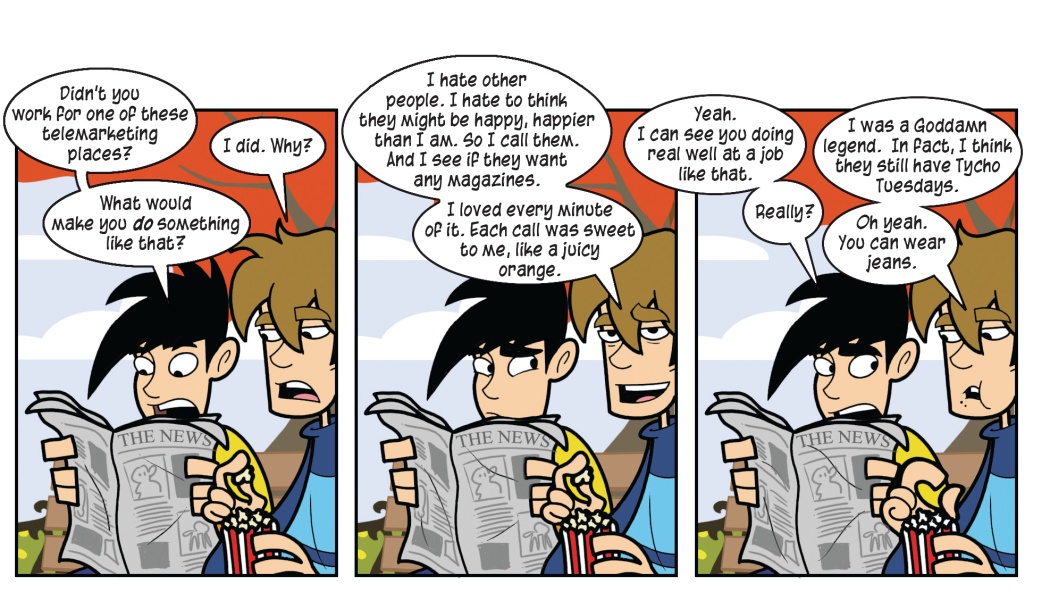 The reason people work at those places is because, no matter how bad things are, even if a meteor penetrates North America and night falls on the Earth for the last time, these calling centers will still be hiring. It follows, then, that they're also always firing - but we'll get to that.

The first thing I had to sell was a service from US West. See, they had sold us thousands of unlisted numbers, and they wanted to sell these people a service that kept telemarketers from getting their number. The customers were often incoherent with rage, betrayed, it was as though I had called a bear. It had just occurred to me that death might be the answer when I was sent to the copy room to get some, I don't know, copies of something. One of the managers was in there already, Marie, I didn't need to see the nametag because I had already loved her, desperately, at Bible Camp. I believe that I was staring at her, at least, that may have been the manifestation on this plane of existence - but at a level undetectable by equipment I was communicating data, years' worth, exquisitely compressed. I wanted to cry, I was so glad I'd found her.

Turns out, she'd been in the copy room.

I need to let you in on some of this Bible Camp action. They're like pretty much every other summer camp, except they have a special guest - Christ Jesus! Certainly the activities were Christ Centered, even soccer, but in practice what it does is add even more drama to a demographic with no shortage of it to begin with. Now, instead of you meeting a girl and it just being regular-old, run-of-the-mill destiny, now a divine hand was at play, the architect of being had invented this union. Many churches used the same camp, they owned it actually, and so you saw a lot of people you might not have encountered otherwise - even at the multi-faith Halloween alternatives. Everything takes place in a religious context at these things, and so it seemed plain to me that Jesus wanted me to spend a lot of time with girls. I was happy for the help, because let me tell you I had already exhausted the supply at my own church. It may be difficult to imagine it, but I was considered somewhat weird.

I don't recall exactly what church Marie was from, and I don't care. The thing I liked best about her was that she wasn't stupid. Like many geeks, I'm used to excluding fifty percent of my vocabulary when I talked to people, it was no different here - but she knew what I was talking about. We reminisced about our favorite LOGO programs, Microzine, and how many daughters you could lose to cholera travelling the Oregon Trail. We saw the Oregon Trail heaped high with discarded daughters, the road itself a valley between dead girls.

It was standing room only on the bus back from the lake, and holding the railing overhead, the jostling of the bus put my arm around her. I swear, I didn't do it. It was as though God was winking at me. The next night at dinner, they had a Chastity Dance where they chose your dates based on what they claimed was a complex computer algorithm when in reality they just watched who you ate lunch with. When our names were announced, we just smiled at other. Of course. It is right and proper that they should be spoken together. It is everything up to this point that was wrong.

The last night, the rest of the Youth Groups from all the churches came up for a final Revival whatever thing. Her actual boyfriend came up, too. Vaughn. Just as the man who is gutshot is made instantaneously aware of previously unknown internal geographies, it became suddenly clear that there was a vast expanse in me, a region, a continent, perhaps even a universe that could contain a truly stunning volume of pure pain. She squeezed my hand in the prayer circle, and we looked at each other while Vaughn's head was bowed. My hand started to hurt with it, actually. But I understand that she was deploying a form of compression, she was trying to communicate something. I got the message.

They record every call you make at these Telemarketing places, because when you're calling people on behalf of another company they obviously want to be sure that you aren't telling people that US West Would Like To Pee On Them, or interesting trivia like "Fortune Cookies are actually ninety-percent rat." You stick to the script on the screen, and you don't deviate from it. The scripts classically do not reference the composition of Fortune Cookies.

As it turns out, I wasn't really cut out for this job. I would sing a lot in-between calls and that's not okay. I wasn't necessarily quick on my feet, either, when people would deviate from the scripts. Also, I completely fucking hated it. So when Marie called me into her office and started playing the tape of my call, my humming somewhat off-pitch, I sort of understood why she might be doing something like that.

What I didn't understand was how such a contrived cheap shot would make it into my life. She had absolutely no idea who I was. She made it clear that though I could still work there, she really didn't want me to. That was fine by me. But it worried me. If I turned in some videos late, would she just appear in the Blockbuster and revoke my membership? What if I handled a cantaloupe somewhat roughly in the produce aisle? I was afraid she might now be my omnipresent nemesis.