It is not uncommon for Gabriels to deploy sophistry in the service of their goals, truly epic feats like sitting on the couch or watching television. In these situations, I can be counted on to act as his barely responsive interlocutor.

When we hatch these ridiculously elaborate plots, I'm thinking specifically of PAX now, I never imagine it all the way to the back-breaking physical labor. It is as though I secretly believe that they will never happen. It's similar to how one day we thought it would be nice to have a toy drive, and then all of the sudden we were spending upwards of ten hours a day opening presents. I'll continue to plan capers of this sort, with the expectation that I will be eternally surprised when they emerge from their ethereal coccoons. Something very large is about to do exactly that, and I am having a hard time coming to terms with it.

Pre-registraton ended with 1337 attendees in total, and though I ordinarily shun leet-speak that number clearly implies the blessing of gaming deities. We were here until midnight stuffing two-thousand bags full of convention goodies. Could all of those really represent people? Also, have you ever seen the Meydenbauer Center? It is the sort of place that legitimizes any event you hold at it. You feel important just being there. It has a beautiful theater in it where you can hold a perfectly legitimate Final Fantasy themed piano recital. It has escalators. Yeah, it's that kind of place.

Then, when I'm already freaking out, the Seattle Times does a work-up on us for the business section. You might find it interesting to see a somewhat alien perspective on what we do here. There's only one portion of the article that I'd take issue with, and that is the part about "selling the company." Without any context, that makes it look as though we're just here pruning this website so that it will eventually be acceptable to some wealthy suitor. The reality is that we understand we can't do this forever. At this future point, long after you are concerned with its fate and we have been consigned to history, maybe someone else will own the site. That's basically that.

If you've seen us at cons or whatever, you've probably already met the Robert mentioned in that piece - he's also been in the strip a couple times. He acts as a buffer between us and the "business" portion of making comics. He also makes sure we don't inadvertently sell Penny Arcade, and before you laugh at that, please understand that this is something we actually did at one point. I don't really want to be good at business, so we could either elect to be taken advantage of by people who are or bind to us a monster of our own. We chose the option that sounded the most like necromancy.

In the meantime, we continue to make comics about genitals while our hideous servants create empires around them. I really wouldn't have it any other way. Although, I do wish that I could have five consecutive minutes without the fear of every good thing in my life evaporating. 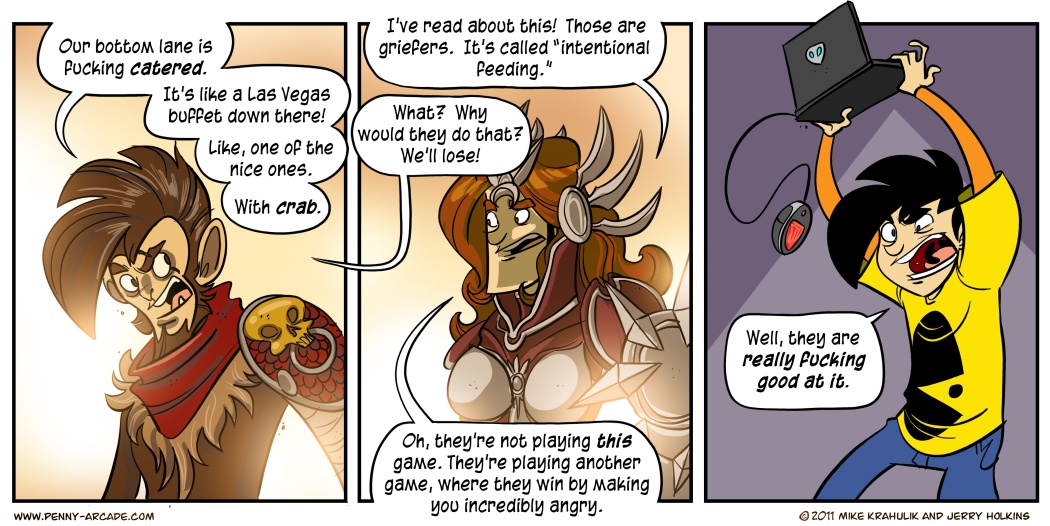