Now I've unsealed the gleaming Ark of the fucking Covenant and revealed the treasures of ancient Judea. 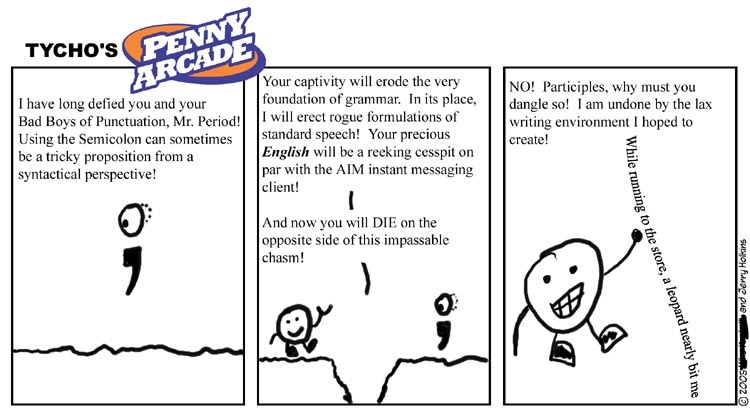 I am, in absolute terms, holstering the spent weapon of gaming humor. It's been hammered thin and it's a literal danger to those who caper thereon. It was said that Penny Arcade's focus had a specificity that was impenetrable to readers outside the gaming context. In the words of a guy, Prior to this moment, you have not been a witness to events conforming to these parameters. From here on out, it's comics about commas having sex with each other. It will be difficult to scale back from a massed throng to three hot librarians and an odd old man with his doctorate in English, but I have a feeling it'll cut down on the gay porn I see in the forums. Gabriel has his own take on the site of course, it's filth, but I'll put it up Wednesday just to appease him and the tribe of mongrels that still ululate for his special sauce.

To understand why I have excised Gabriel's deleterious contributions and latched cynically onto the next "big thing (a slick hybrid of punctuation and titillating smut)," you must understand the momentum we have ridden to this point. You may think of the first wave, as you may always think of the first wave where technology is concerned, as the Niche/Early Adoption wave. No-one was aware at the time that uploading a .gif to a webserver was an act of rebellion against the cavernous husk of traditional publishing, but we'd have fancy lads enough to to cook that up after the fact. These comics largely concerned topics of intense interest to the creator. Some of these have gone on to some success. Dinosaurs and other archaic organic matter also managed to succeed in the modern world: they simply existed long enough to become petroleum.

They followed the Michael Buonauro Reverse Success Rule, which stated in its classic form reads thus: If you want to be a success in webcomics, start in 1998.

There didn't appear to be anything particularly difficult about it, and so the second wave was born. This is usually termed the Everyman wave. Democratizing technologies like Sprites and Flash opened an avenue of expression even to those who could not harangue a friend into drawing their shit. Keenspot epitomizes this wave, but more specifically Keenspace. Many comics, not all, but many in this wave are reformulations of first wave comics, which should not surprise us as scholars. Everyone has to learn, and even if a work is but a grim autopsy of an established body of content, this process is underway. That the Internet makes the tortured adolescent period public is a fair trade for its other bulging and illicit fruits.

It was only a matter of time before they came to purge this medium, and their whirling, luminous craft have landed. Wave three self-important students of the arts have come to expel the Philistines from what they perceive to be a kind of Holy Land, a pristine canvas if only it weren't for the rowdy locals. The rise of the critic/cartoonist should tell you everything you need to know: like some legendary malefactor, each hand expresses a new doom. You can't criticize a critic without sounding shrill, and since they're critics they know how shit works so their stuff is automatically great. Presumably, this is the kind of legerdemain one learns at an accredited institution.

The new Penny Arcade is designed to appease this cultured palate. Obscurity is often mistaken for keen interpretation by people who should know better, so I feel confident that my new works will rise like... Well, think of something that rose in a long, old book. Then, imagine it was my stuff doing that.

My art has come a million miles since those hesitant initial forays. Now, each link in the Semicolon's nefarious monocle comes into being with the compressed meaning and import of an entire fucking universe. Tell all your hot librarian friends.

May Not Be Spelled Correctly