Live Anywhere was one of the most elaborate things shown at a show known for elaborate things, but it doesn't condense particularly well, so wringing the meaning out of it can be taxing. What's more, my cohort actively hates the idea, so any pleasure I'm bound to derive from the process will likely be leached out by his withering rays of wrath and scorn. 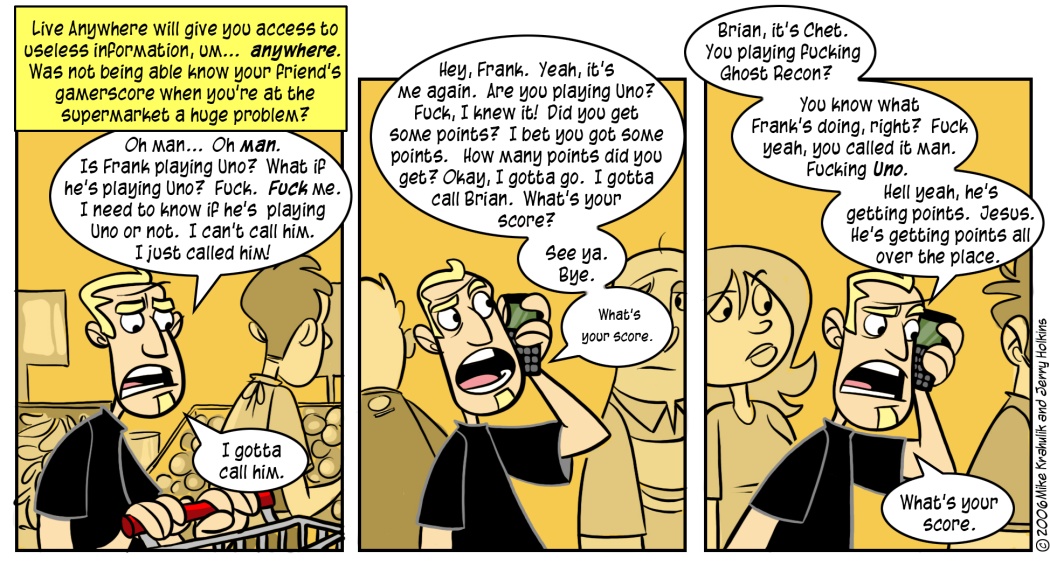 Essentially, your phone (Java based or one of the mobile Windows platforms) will commune with your 360 at home and your Vista based desktop.  If you want to see what it looks like in action, Eurogamer's got you covered, and if you see more about how it relates to portable games I'm sure Engadget would love to talk to you. I've heard this type of phalanx called monopolistic, but I think the nice way people describe the same idea is that it "leverages synergies" or something like that. Synergy, now that's a very Robert kind of word. But Synergy is also the name of the holographic supercomputer in Jem, so it can stay.

Singing with one terrifying voice, the different platforms are capable of some neat tricks. The proposed function that makes the most sense to me is getting an alert on my phone that a new piece of DLC has dropped - the imminent GRAW pack, let's say - and then telling my system to download the Goddamn thing remotely. It seems like novelty when the idea is first presented. Now, that's how I want my life to work. Even my unstable and sometimes dangerous companion can see the wisdom.

By and large, though, he has no use whatsoever for information like this, and might even be a little offended that Microsoft thinks he has this kind of free time. He doesn't care what I am doing or not doing, this is true as a general rule, but it is especially true when he's not in front of the system and can't interact usefully anyhow. It would be like running a stock ticker that squawked like a parrot at random intervals, displaying only Venusian companies that won't exist for another five hundred years.

By contrast, the information addiction I allude to in the title is a description of my own condition, dark and sweet, like molasses. Our Gabriel does have issues of his own - know this. And know also that the hungers he grapples with are shameful indeed. But he's never read Scientology court transcripts for three days straight; he hasn't seen a rap show and then spent a week studying the balkanization of UK hip-hop, with breaks to meditate on the Chav issue.

I'm not saying that I bear some virtue he doesn't, although I believe that is manifest. I'm just saing that I'm crazy about information in the way that makes metadata about my friends a subject of some curiosity, even in my grocer's freezer.