While we languished in the terminal awaiting news of our delayed flight, we devoured any kind of stimuli - including expensive airport magazines. I believe the advertisement we present you with today is from Wired originally, but there were many such magazines, and after six days engaged in various kinds of labor I must say they ran together. 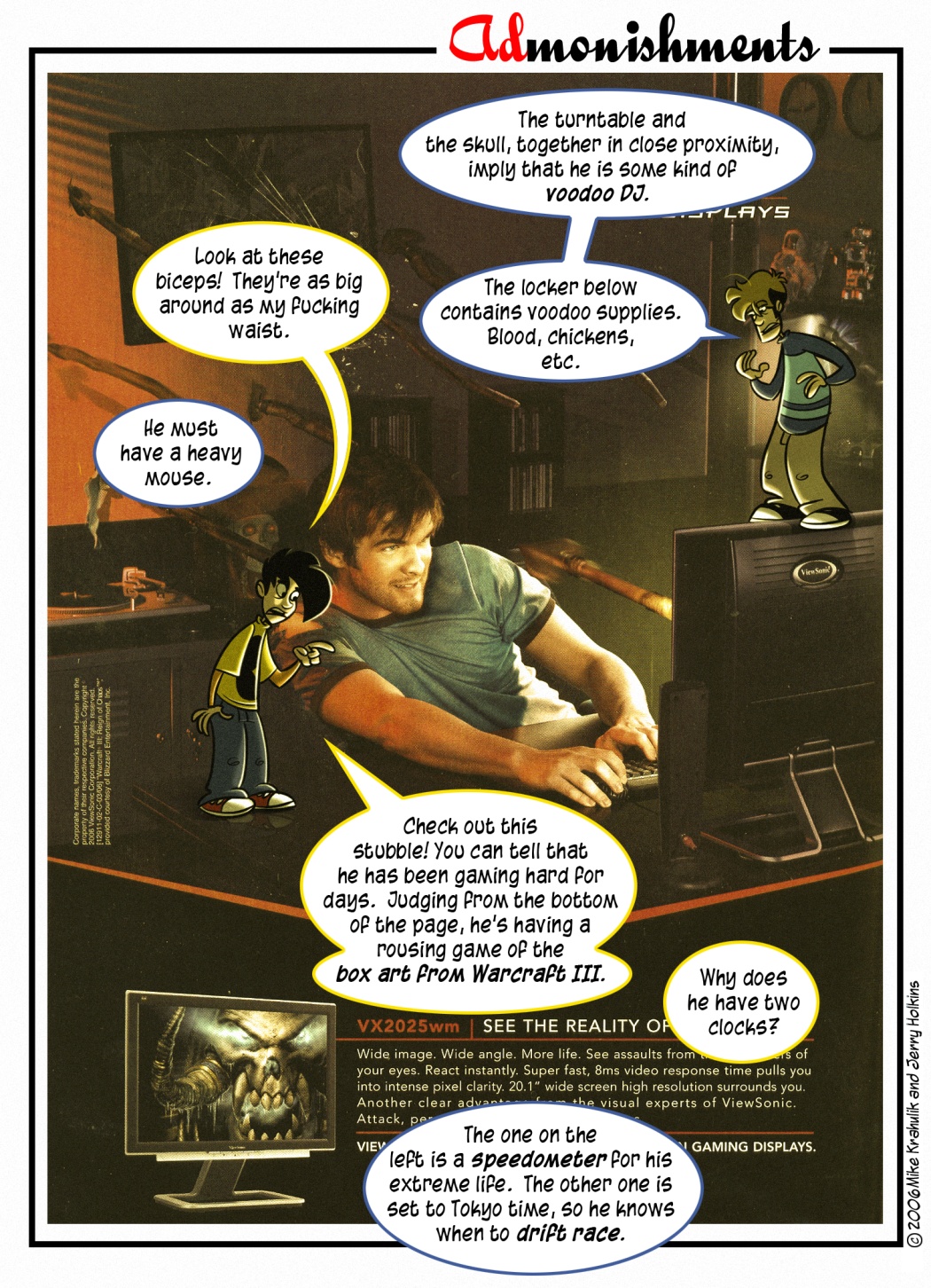 In any event, let us now thank ViewSonic for inaugurating a new site feature: Admonishments. That seems like something I would make up, but no, I suggested we call it the Adversary. The name is pure Gabe. You are correct - the one who pretends to shudder and sigh when I use a word he hasn't heard on American Idol.

There is nothing beyond the commentary in the strip to say about the ad, other than to establish that it is ridiculous in purely general terms. I suppose there is also the implied warning that your own horrific advertisement is next. When placing your next skull or turntable, you are hereby urged to think carefully.

I never got away from the booth to see it this year, but at last year's con The Behemoth had an early version of a four player brawler in the form of Final Fight or Knights of The Round. A couple of years ago, I was excited to see that they'd built a team to take their deadly Alien Hominid to retail on all platforms, but I get the impression that the experience was pretty sub-par: from the looks of it, they're moving completely over to Xbox Live Arcade with their projects. Once the Wii and the PS3 deliver their own online channels, maybe we'll see them there as well - but for the moment both a widescreen edition of Alien Hominid and a much more robust version of their brawler (now called Castle Crashers) are both hitting the 360. I can't express how hot this is. We've moved from "Pop 3" puzzlers to fast-paced, four player assaults like the Behemoth project and Gastronaut's Small Arms, to say nothing of insane basketball fantasies or whatever this thing is. I knew when I played Marble Blast Ultra in multi that there was a lot more that could be done, but I have to admit being surprised by some of these developments.

If you'd like to hear more about Castle Crashers from the guys themselves, Game Informer has a refreshing interview on tap.

I have discussed Sword of the Stars on more than one occasion, and now there's a publicly available demo, which means my excruciating prose is no longer required. There were a couple weeks there where all I played was the beta build, and even with limited races and technology there's a significant amount of game here. I understand that the demo has forty-star map to play on, and though custom games can go much larger than that a "mere" forty stars still represents a significant conflict.

Also, because we were gone when the prospect of a Horde Paladin or Alliance Shaman was verified: it is almost one-hundred percent pure bullshit.

i can only guess