Positive Sony news here, at Penny Arcade? I know, right? We shall redouble our efforts. The story all this was based on has been changed to say that none of it is true, or that very little of it is true (depending on who you ask), but if you're asking me I think the original story hit pretty close to the mark. The alternative - which is to say, that xFire technology would be used for a single game and no others - suggests that their service will be another briar patch of vendor "interpretations" of an online community, which can't possibly be true. I refuse to believe that, in this generation, they would leave something like this to chance. 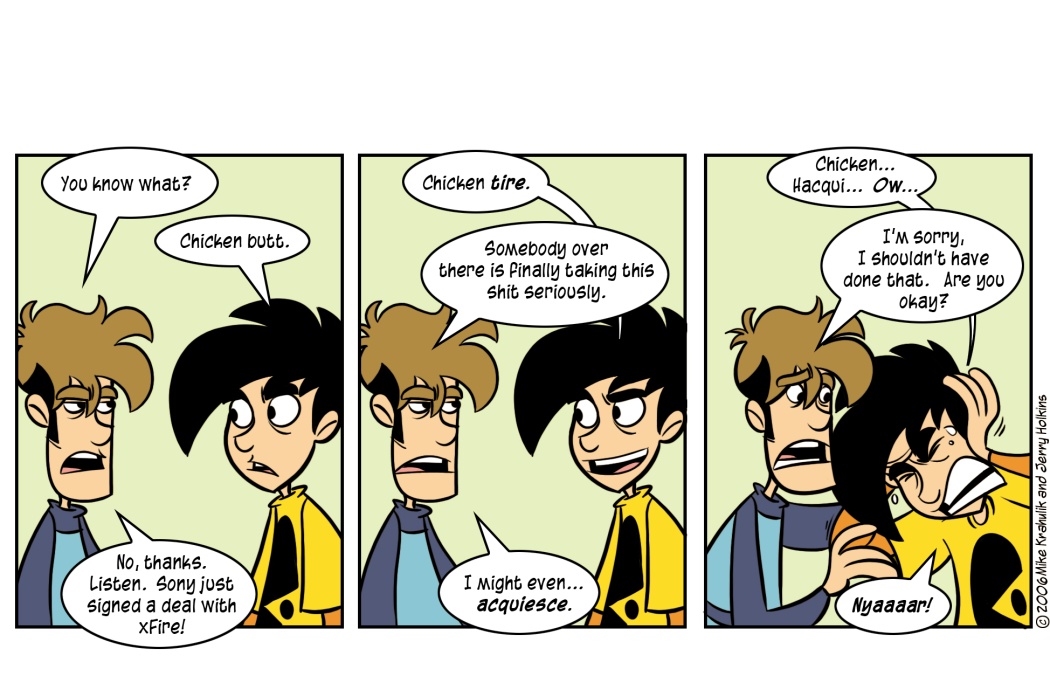 I don't have an active policy that transmutes all Sony news into dire prophecies, bleak portents just circle that company the way carrion birds might whirl around a stumbling gazelle. I don't own any stock, I don't care who "wins," and I vastly prefer the PC in any event. I follow console news because it's fun, like tracking the rivalries in what was once called the World Wrestling Federation. There are larger than life characters. There are signature techniques.

This overarching policy firmly established, the idea that Sony would turn to xFire is probably the best news I've heard out of the company in more than a year, and it's not even from the company. They can't even be bothered to place the wafer in the waiting fanmouth. This little treat had to be shelled out of an earnings report from Viacom, xFire's parent company. It doesn't matter - Sony still gets the points.

xFire was purchased back in April for 102 million Goddamn dollars, and it is now starting to become apparent why that might have been. The technology might be adapted to "broader network services," you say? You mean like Single Sign-In, "Rich Presence," Friends List, Instant Join, Profiles, and Integration With The User's PC? It's a robust, turnkey suite of network functionality that is free to users - one that emulates, virtually point for point, what Gamers At Large consider Microsoft's unassailable stronghold. If I'm wrong and they aren't actually leveraging xFire, they should really be asking themselves why.

In today's heated argument, Gabriel suggested that xFire alone wasn't capable of countering Xbox Live - but it hits the high notes, as I suggested above, and I think that most people could be very satisfied with that suite. He considers things like Live Marketplace and Achievements to be compelling, unique offerings bound to the 360 itself. I'd love to respond to that in a sensible way, but Sony isn't even arming the faithful with such useful information, let alone apostate Internet steel cowboy motor rebels like myself.

they pray for the death of our dynasty