Platinum Studios, whose chairman Scott Rosenberg has something of a history in the print comics industry, is now - according to the New York Times - going to dip his tip into the moist world of webcomics. The most savory quotable goes: 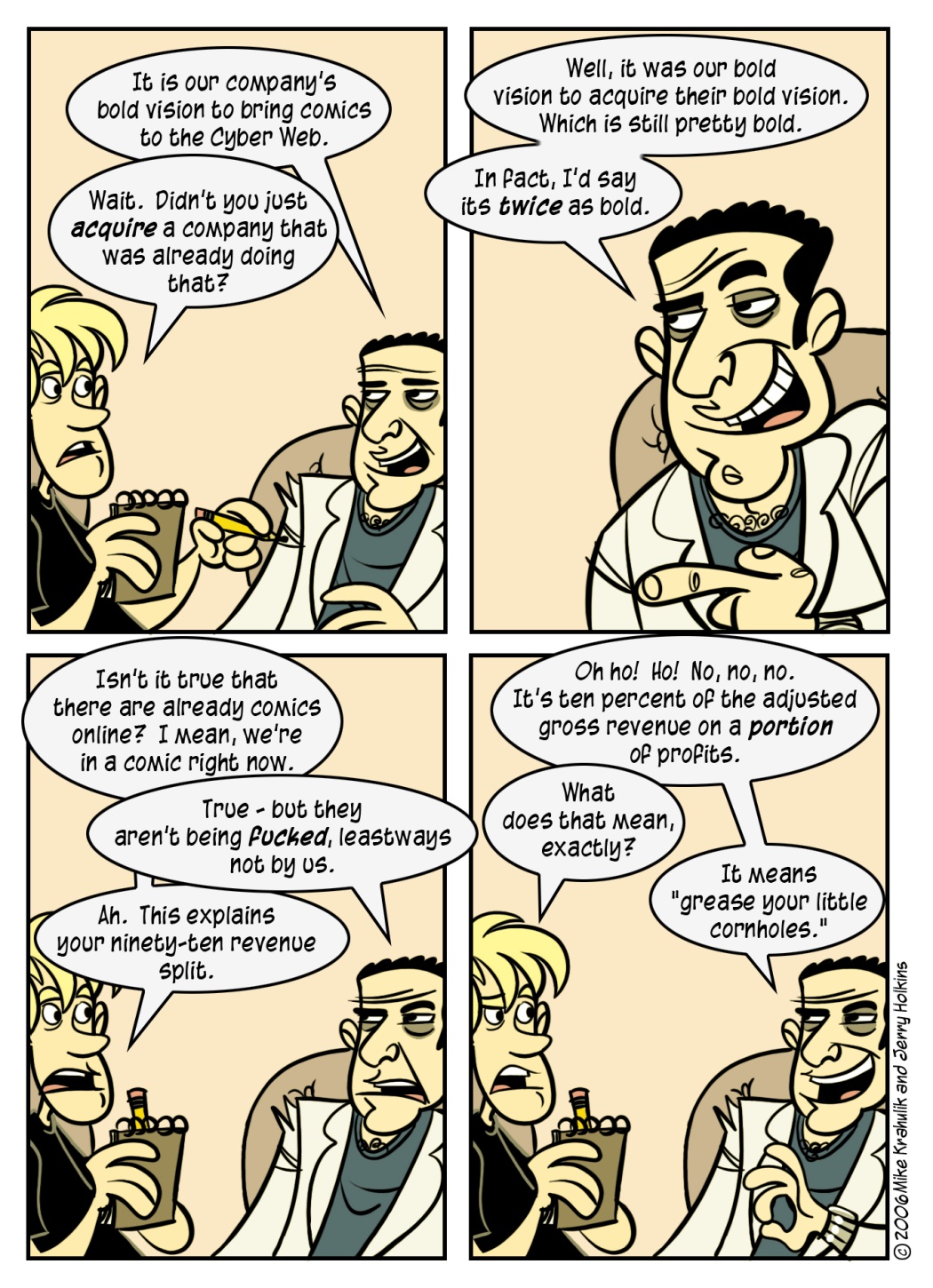 "We want to make a statement that it is safe to do this, that people can do this."

Good, because as it stands only rabid weasels are reaping the benefits of digital distribution - it's about time human beings got into the game. It's either a statement of profound naivete or profound hubris. Saying that you're going to make the web a place for comics is like suggesting that you plan to colonize the Earth. If they want to break down the walls that keep artists from publishing online, well, I hope they brought a wall with them, because we don't really have anything like that here. I suppose we could special order.

This definitely has a "gold rush" feeling to it, and it's far from over. There is so much excellent work being done online and then being parceled out for practically nothing that it was only a matter of time before the city slickers caught wind of our potent local sauce. When they - and Platinum may prove more benevolent than the shadow lords in their wake - when they come for your life's work, at least try to negotiate visiting rights.

You have most likely heard that Opera Software is offering their browsito on the Wii, just as they are for the DS. Neither product fills a need for me, as my phone retrieves web pages without complaint, like a faithful hound. I'd heard complaints about the fact that Nintendo was charging for the Wii version of the browser, especially from people who were already feeling singed by forty dollar controllers with twenty dollar attachments. This reaction might be part of the reason they've chosen to offer the product for free until next summer, but I'm not sure it was ever really Nintendo itself charging for it.

Much of the furor was over the fact that "Opera is free for desktops," so charging for it on the console was (like the higher than expected price) more evidence that we were at the behest of a mercenary organization. I can't really speak to a pervasive willingness to wring out the consumer, but I don't think this is a good example: Opera is only free on PCs because charging for it in that space (as they used to do) is howling, abject madness. Browsers be in-built, dog. In-built or free and awesome, which, I mean, wow. I'm glad I don't make alternative browsers.

Opera does charge, though, on platforms where it makes sense or they have an advantage: when the loyal phone I mentioned earlier brings me the page I requested, it does so via Opera Mobile, a product I purchased for twenty-four dollars. I simply prefer it. There was a browser on the phone already, but many of the pages I want to visit detest it, and the miniature version of Mozilla I would have preferred to use - MiniMo - doesn't actually, well, mo. Or whatever the verb would be. I honestly don't know.

It doesn't do it, and maybe that's the important thing.

but wait 'til you meet his accomplices