We are mentioned briefly in the most recent Major Nelson Radio podcast, where we learn that the man apparently can't remember which one of us is which, even though he stood before us in our marble reception hall only days earlier. The end of the same podcast features an interview with one Chip Lang, Vice President of Online Commerce for Electronic Arts. The good Major keeps it social, and does not savage his guest, presumably because he likes his job and would like to keep it  Never fear!  We can do what he can't. 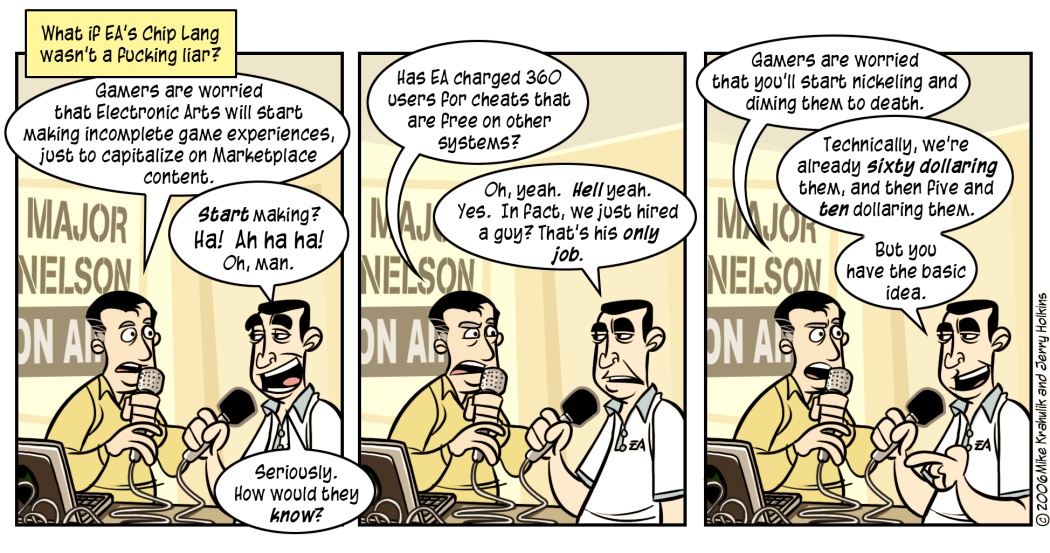 Major Nelson (his real name cannot be pronounced by the human tongue) does press on a single issue: selling unlocks that come free with last gen games. Chip doesn't tell us that EA hasn't charged for codes that are free on other systems, rather, he tells us that he doesn't know whether they have or not.  You will, I hope, forgive my incredulity. Is the Vice President of Online Commerce too low on the totem pole? Maybe there's someone else there willing to tell us what five seconds on GameFAQs could - that you unlock golfers and courses with a single code on the original Xbox, and on the 360 you also enter a code, except that code is your credit card number, at which point they take your money. Make a note of it for your next dissembling, tell-nothing interview.

Chip likes to talk a lot about accessorizing your gameplay experience with new content, but truly new content doesn't make up the bulk of EA's game specific offerings - no, their menu mainly consists of things that already exist in-game. The choice rhetoric is a dodge on their part. A "juke," to utilize the context appropriate Madden lexicon. Gamers aren't angry that they are being given (quote) choices, though let's be frank, these are some pretty shitty choices. They're angry because EA is trying to sell them the game they just bought, again, piece by piece. It's of no merit that they can choose to buy it or not. You offered it, and that reflects on the kind of company you are.  It's not any more complicated than that.

Mentally, I have tried to reconstruct the conversation that must have lead to this sorry state of affairs. The spine of their company is these annual franchises. Trouble is, people are only buying one of them a year!  It might never occur to you or me to try selling people the same game they have already bought - it's pretty outside the box thinking. The box in this case is labelled Common Decency. We as consumers authored the strong columns that hold their ceilings at a comfortable level. They may find our appetite for architecture beginning to wane.

Many users are also rankled by the tutorial videos they offer, which (the actual utility of the videos in question aside) doesn't bother me in the slightest. I'd be shocked if Prima and Brady didn't get into this, or enter into arrangements with publishers to produce them. I used to swear the things off altogether, but with the state of what are called "manuals" these days it's getting harder to find even rudimentary information without an official guide.