Gears multi had just become a nightly fixture, and then - wholly without warning - it was over. A pack of downloadable maps (already in progress?) might give us another night or two on Sera, but the reality is that the rest of Team Inferno has moved on to Rainbow Six. 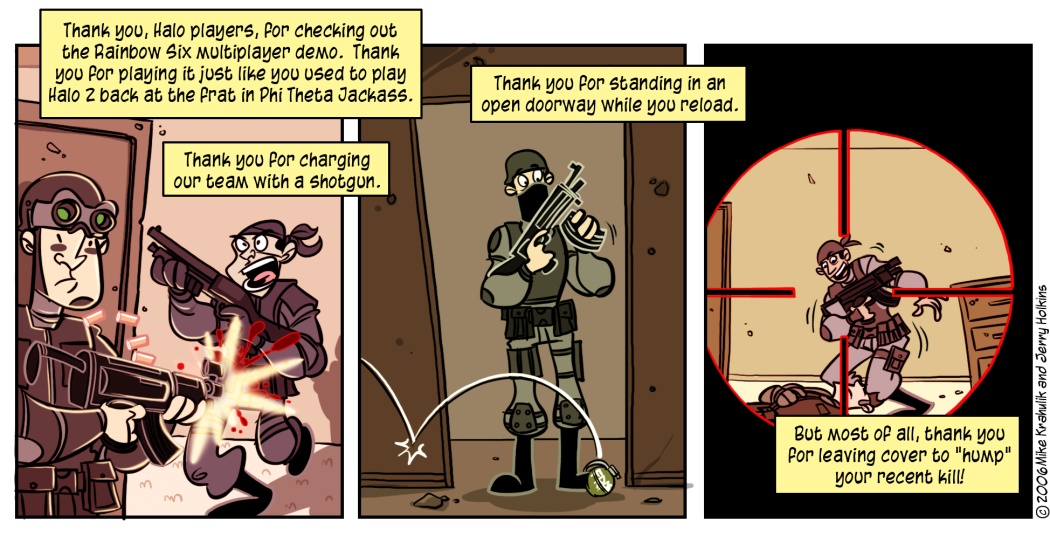 I don't really feel like I'm done playing Gears, which I continue to be impressed by, but one gets the impression that the "tribe" has spoken with some finality. It's a shame, because this is the first game in a long time where I represent a true opponent, and not just cover for some competent teammate until the inevitable headshot. I developed the term "sawdomized" to describe the unique process by which I carve men. On the Bunting-Friedmann Threat Index, I clock in somewhere between Bruce Lee and Bahamut from Final Fantasy X.

But there are issues with Gears of War that, for our group, are intractable. They are not technical issues for the most part - the polish level and overall gameplay philosophy could, with Epic's legendary support post-release, produce a kind of brand "dynasty." My opinion of it is that high. The invasion metaphor and overall aesthetic has no doubt scared them away, but the Nintendophile in particular should find much to enjoy here. In terms of software issues, players sometimes get stuck on the environment. It's happened to me once. This one time (presumably at "band camp") I phased through a headstone in Mausoleum, only to find myself in perpetual grey expanse known as the Nega-realm. But, again - rare.

Four on Four works very well, better than I expected, because every foot of every map supports the thesis. The issue is that we can easily fill out a server like that ourselves without much effort. We can typically field five to seven people a night, which is exactly the wrong number. It gets a little claustrophobic. Fighting his friends, let alone sawing them in half or stepping their heads off, is not why Gabriel plays games of this type.

Though the games supposedly have an engine in common, Rainbow Six in multiplayer mode is a significant step down visually. The amazing models you've seen in the single player demo don't make an appearance, but fully customizable avatars do soften the blow - particularly since they are tied into a persistent experience system. You don't actually earn experience in the demo, but apparently you come by this precious resource whether you win or lose, and as you accrue rank new weapons, armor, and camouflage patterns become available.

I saw a couple games at E3 touting this feature, and Rainbow Six Vegas has it also: face mapping with the Live Vision Camera. Much depends on the light of the room, but you can achieve some fairly scary results with very little effort. These things are all nice accoutrements, but aside from the increased player limit (fourteen), the main draws for the group are Greater Lethality and Simulation Feel.

Greater Lethality is something I imagine can just lie there without further description. There is no "down but not out" phase, you can't be brought back. These are men with machine guns in casinos. You get one shot. Personally, I like it the other way. We were big into Wolfenstein, and the idea that any player can bring any other player back without taking a class actually appeals to me a lot. But I won't deny the tightrope rush of terror one feels in its absence.

Simulation Feel has to do with it being an R6 game, and lethality is certainly a part, but the main thing I think for the squad is that there is no "magic button" that handles every interaction between character and environment. Now, again - I like this. I'm just letting you know the consensus view: that putting the into/out of cover command on the left trigger as a toggle gives them greater control over their actions. When people get close in Gears, and you jump to avoid a chainsaw (or grenade, etc) you will quite often enter cover instead of evading your foe .  How many times someone is willing to die from this varies from person to person.

It ships today, for the 360 at any rate - Playstation 3 owners will see what I mean when it launches next month. During the contentious "launch season," it's nice to finally talk about something that is relevant to more than one machine.