Today's comic is based on a story we saw at Kotaku, but when I went over there to verify the link the story had been removed altogether. For those of you playing along at home, what that means is that Kotaku 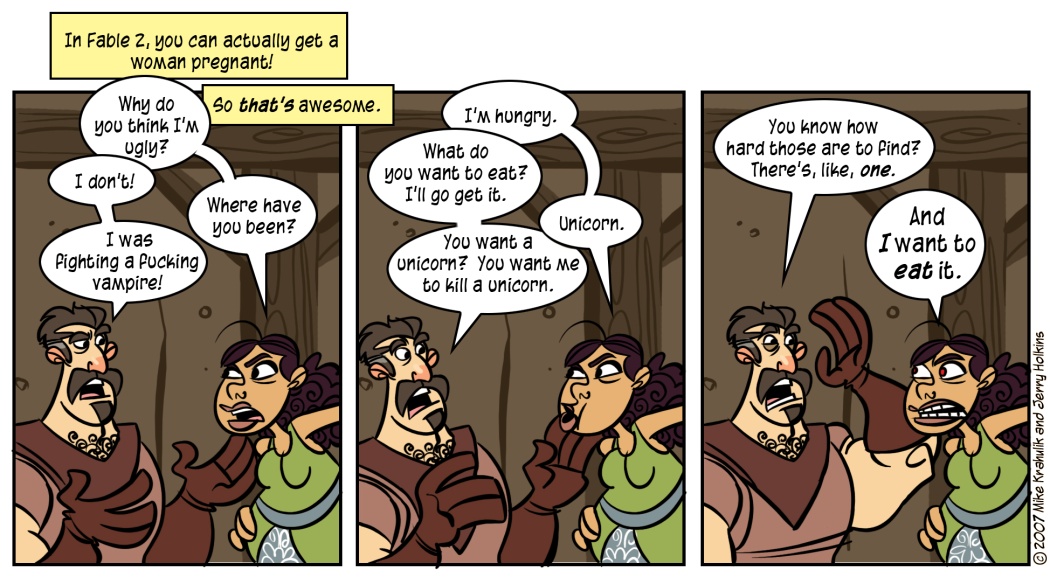 does keep a story when it is an absolutely uncorroborated rumor, but will

remove a story when it is a direct transcription of a conversation they have just had with a public figure at a press event.

This is good information to have!  I've always wondered what the system was, exactly, and I really think I'm zeroing in.

I see that the Gameworld Network has retained a rich, gravied haunch of the original article, however - and it is there that I shall direct you. Yes, as established in today's comic, Peter Molyneux is now suggesting that players will be able to father children or give birth, depending on... Well, you know what that depends on. I assume there is a minigame involved. I can name a couple titles off the top of my head where lineage plays a part, but I can't name one where the character that you play yourself is pregnant.  We've bee host to gestating organisms, yes, but these creatures are never something so exotic as a human being.

Either way, you know, procreation: we are still in the general neighborhood that we call Reason. Look, there's the Sanity Cafe. It's in Rationale Square, just down Explanation Street. Causality hasn't yet gone out of vogue, and things occur according to a discernible framework.

Then, after he tells us this first bit... I think he starts to feel a little self conscious. Is this going well? That lizard-looking gentleman in the rear appears to have dozed off. Maybe Peter starts to feel like he needs to spice this thing up. We've all been there, I think: meeting someone for the first time, someone who doesn't have the time or the tools to research your claim, you might suggest that you once made a living mining nougat.

So then he (quite understandably, I think) starts to talk about how the game has a dog in it, and it's, um... your dog, and this dog is the... user interface...? This is something he seriously fucking said, and if someone else had said it maybe I could manage a little joy.  You simultaneously control this dog, and do not control it (?).  There's no screen element communicating information to the player. You are supposed to gaze upon their simulated dog and somehow figure out what the fuck is going on.

That sounds like some bullshit to me.  People at GDC were able to see this dog for themselves, and apparently it impressed them, but Peter's recent antics have depleted his Good Faith Account. From now on, it's only full playthroughs of retail products - trying to find the point where he stopped caring, so that I may stop caring also.

with an aching in my head