300 is a movie about guys who look cool doing things that are awesome, and as such it's hard not to like it. It leverages swank technology in the service of its cinematic mission. Also, there is a portion of the film given over to a creature, equal parts goat and man, who plays a flute inside of a golden tent. So it's the sort of movie that really has something for everyone. 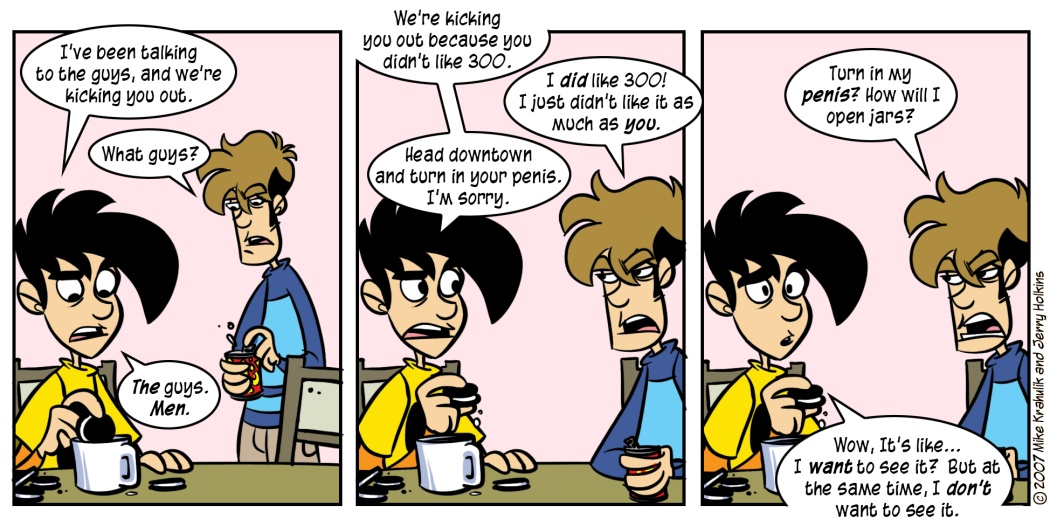 Merely liking the movie is apparently not sufficient for my counterpart: I must swear oaths by it, or belt out anthems re: its timeless power. It is a perfectly fine movie, and your investment will not go amiss, but I have not been altered by the film at the molecular level.

Gabriel was angry with me when he was drawing the strip, this happens sometimes and it can't be avoided. If it were about something interesting, I would tell you. It's rare for us to actually fight unless Duke Nuke Them 3D is involved - typically one or the other just seethes, guttering and frying like a tallow candle. In any case, his complex inner life was captured in this instance - you can bear witness, if you like. That's what the strip looked like when he sent it to me initially.

There was always going to be a black version of the Xbox 360 with HDMI, as soon as the idea was presented it seemed to resonate at the proper frequency. Everything else about it - from the price to the amenities to the size of the hard disc - was cloaked in mystery. It might still be, depending on who you ask, but there are "confirmed" tales out there offering this or that detail. Engadget (in particular) is suggesting that this new version of the system, called the "Elite," will be a limited edition prospect, sold alongside the existing models. Before these semi-official pieces, I'd heard that this product would just bump out the "premium" model - something that always seemed a little wishful to me, a heartwarming story with a happy ending for everyone.

Most places are calling the price of the machine (which comes with a 120 gig hard drive) at $479, which is interesting tactically. The five hundred dollar model of the PS3 was exceedingly rare when we went on our little field trip earlier, and I don't think this will change much going forward: low supplies of this model made this SKU more of a rhetorical device. That explains the pricing, at least to me, because putting a $480 dollar Xbox 360 against that 20 gig PS3 is suicide, from a raw features perspective: it only makes sense if a) they truly see themselves in a position of strength here, which is premature, or b) if they think that true competition at the five hundred dollar level doesn't exist.

I've also heard (as you may have) that the standalone version of the 120 gig drive is going to clock in at around two hundred dollars, which reveals a company in the throes of brain fever. The machine is locked down so hard that virtually all you can do with a drive this large is load it to the brim with premium content! They should be subsidizing the Goddamn things, not raising them overhead to scourge early adopters.

They chose not to incorporate the wi-fi adapter they currently sell as an add-on for a hundred bucks, and the reason for that is revealed earlier in this very sentence. They also chose not to make a larger play on HD-DVD, possibly because the rout is beginning, but I don't know that they were never terribly invested to begin with. The HD-DVD/Blu-Ray "Conflict" is largely illusory, the mindless twitching of an industry in the sure grip of a predator. HD-DVD is perfectly acceptable technology, but Sony's substantial trove of cinematic IP is simply insurmountable. They can't claim victory in a format war simply by fiat, but they may absolutely deny victory to another party, which I'm prepared to call a functional equivalent. I was under the impression we had laws to protect consumers from this sort of thing, but who knows?