Reading a preview of the newest Harry Potter title - the one for the Wii, with motion sensing wand controls(!!!) - I've begun to make certain preparations for its eventual release. I've had my robes pressed, my scarf of blue and bronze dry-cleaned. I've also endeavored to secure certain... materials, shall we say, of a mystical nature to augment the experience. I was aware that Gabriel owned a unicorn, but I was not aware that he was operating some kind of supernatural zoo. 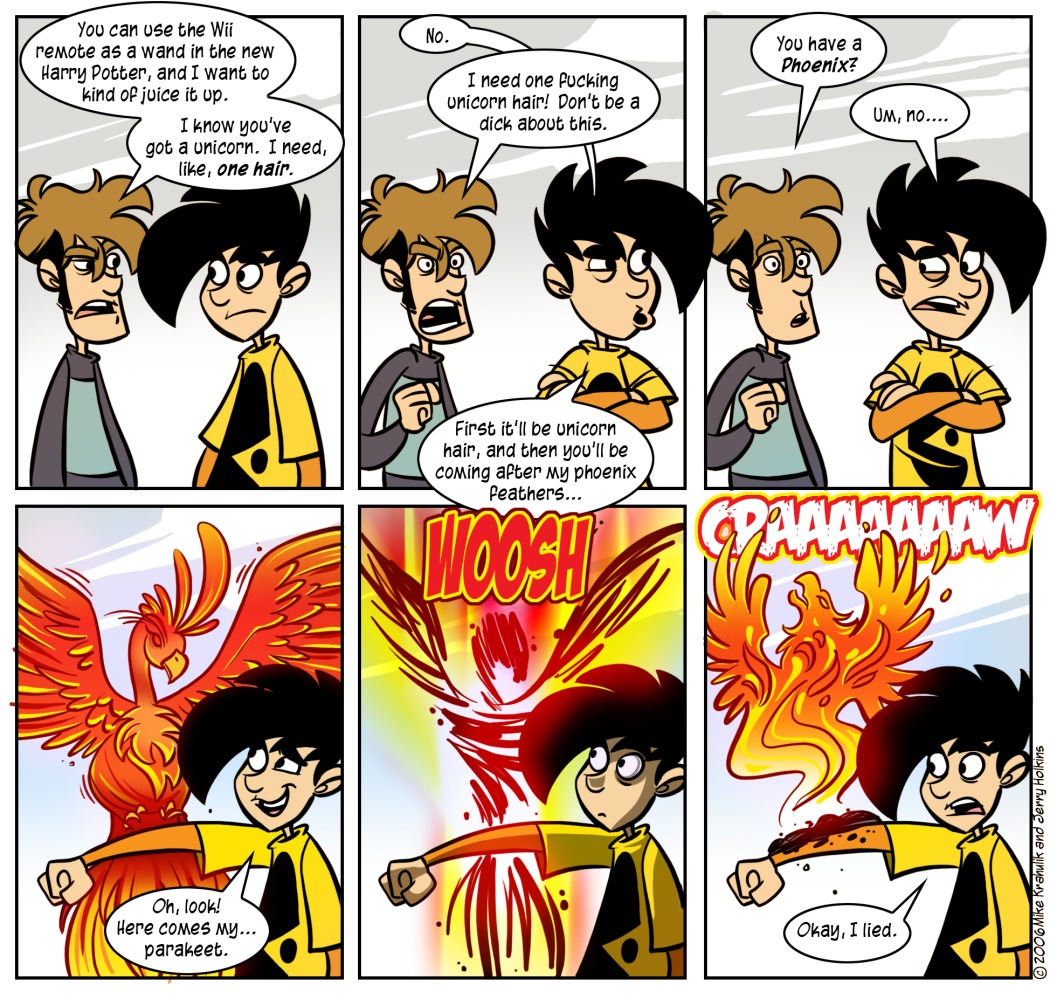 Reaction to the cost of Guitar Hero II's downloadable content has been such that Joystiq cornered Major Nelson at a recent event to try and discern precisely how much crack cocaine was involved in generating the pricing schedule.

There are a lot of ideas presented as to why it costs as much as it does - things like new licensing fees (which I'd already heard about) or the cost of putting items through certification. These are factual hors d'oeuvres, though, and I'm looking for something more main course.  If it is fair and just to charge rates of this kind, if indeed they must because they are flanked on all sides by evil license holders, then why would Activision purchase such a demonstrably failing business entity?  Because again, if these prices are legitimate, the mathematics never work - there's no point at which this series becomes solvent.  Each disc is a headstone.

They've made it so that the only sane bet is to purchase nothing but the annual releases, where the content dips below a dollar a track and new features further compound the value. There's a strange mathematics that goes on when purchasing things, and similar to Quantum Mechanics it only gets stranger as you deal with smaller amounts. Most Marketplace offerings operate well beneath my impulse buy threshold - usually I leap at opportunities to build onto the parent purchase. I'm not a person who believes deeply that all content should be free. You really need to have a tin ear for for consumer demand in order to elicit this kind of response from me.

Continuing with the micropayment theme, I decided to upload that older podcast I talked about the other day, the one with the owls and so forth - the feed is available here. It's available in two parts, which is to say parts one and two. It describes the writing process for the strip entitled "Reading Between The Lines."  It's not perfect - the Gears talk at the beginning is now hopelessly out of date.  For example, to produce the Lancer these days is to invite death. I think we might have our facts wrong in a couple places. But the conversation investigates some interesting locales, and certainly the price is difficult to argue with.

We're just now heading up north to work on the game, but I have been asked to remind you that the Heroism shirt has returned to the store and can be had in a "babydoll" version as well. Also, the new poster Gabriel mentioned is now available.

the hardest way to make an easy living