I understand that Eric Nylund drops Halo fiction much sharper than one might expect, but after a youth singed by Forgotten Realms product I retain a healthy fear of the tie-in novel. Command & Conquer is the next franchise to receive the treatment, this time from Keith R. A. DeCandido - the strange force known as KRAD. I'm not familiar with the man's work, but there is rather a lot of it, and much of it tasked with distilling an existing brand into explosive paperback fiction. 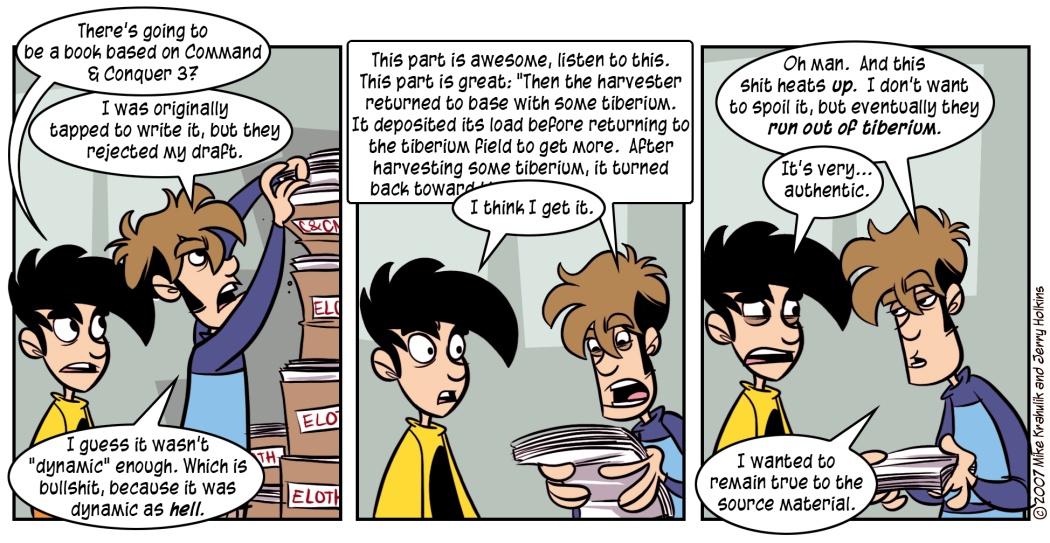 I don't mean that to sound derogatory, assuming that it does: our friend Karen Traviss wrote a really interesting defense of licensed fiction that I've been meaning to pass along for awhile. My own groundbreaking work on Epic Legends Of The Hierarchs: The Elemenstor Saga certainly fits the bill, and the reality is that I completed a Command & Conquer 3 novel which was then rejected. Their loss, as you will see.

I was looking over the DeCandido oeuvre for the post when I stumbled across his original novel called - and this is awesome - Dragon Precinct. It's fantasy crime fiction! I would laugh and laugh if I wasn't convinced that could really work.

There were reports that Calling All Cars would release on Thursday, which did not happen, but I was consoled by the news that Ninja Gaiden Sigma and Virtua Tennis 3 would both see demos released the same day. By the time they were released, six hours after the announcement, it was clear I wouldn't be able to actually check out either of them.  I daubed the corner of my eye with a handkerchief, determined to face the future unafraid.

Calling All Cars is apparently the most compelling phenomenon it is possible to experience, so I'm looking forward to playing it. It also highlights a serious difference in how Sony and Microsoft see their distribution initiatives, which is another reason to look closely - developed by an internal team and headed up by a man with industry clout, Calling All Cars seems virtually designed to show up Live Arcade.

Live Arcade is actually a subset of Microsoft Casual Games, so while the hardcore certainly appreciate weekly content infusions and clamor when they are not timely, we were never its aim.  The purpose of Live Arcade is to make their platform a valid mainstream play.  Marketplace has a wider purview, but Live Arcade is designed to deliver a certain kind of inoffensive, family-oriented product and it does so.  Until recently, the scope of these products was also enforced through a stringent filesize restriction.

Microsoft's position here (as elsewhere in their empire) is to establish the platform and then let partners create the real value.  This means that for games in miniature, ready to deliver, they have often sought out players who are already doing the same thing on their other connected gaming platform - you've seen this content before, in many cases.  You can contrast that with Sony's approach, which has thus far been to channel much, much less content of vastly higher polish, often from teams that are first party or powerfully aided thereby.  I don't actually know which one consumers prefer, I can't see the deep stats - I simply find these disparities fascinating.