We picked up Spider-Man 3 on Friday - for the Playstation 3, as it features some unique Sixaxis content - and immediately had cause to regret the purchase. The long initial install preceded a game that was too much unchanged from its predecessor, in addition to often being ugly and running poorly. Like Star Wars: Battlefront and Enter the Matrix before it, well timed "brand synergy" products aimed to pierce the market, there will be no great reckoning for its grave sins. In fact, the result will be quite the opposite. 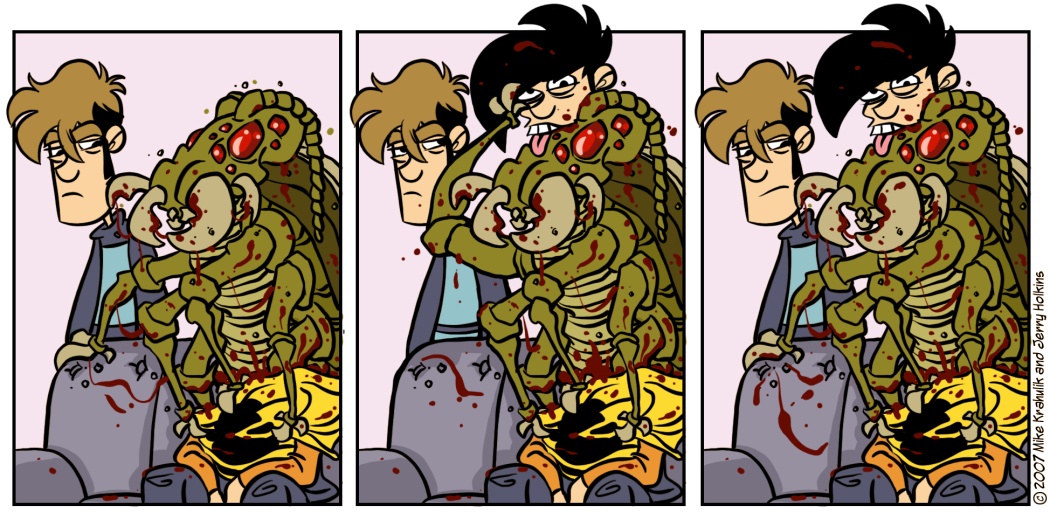 If we'd had the idea before, it probably would have been a six-panel "Double Decker" strip similar to, say, the one with the claw shrimp. We started to become obsessed with the moments immediately following last Friday's comic, to the extent that we wanted to make them absolutely explicit.

The rumor floating around these days is that Blizzard is primed to announce a Starcraft MMO in a week and a half, as opposed to a new RTS. The reality is that you can't be rewarded like they have on a global scale and not have it deeply impact your business philosophy. Let's say they did make a new Starcraft game in the strategy vein - fifty-five dollars up front, with free online play and a forty dollar expansion six months hence. With this theoretical Starcraft MMO, you're looking at fifty-five dollars up front, with an additional one sixty-five in subs your first year, plus one-eighty each year thereafter and the inevitable expansion. What's more, these subscriptions (and in some cases, the expansions themselves) are money that goes directly to the company, as though ferried on the wings of angels.

I don't know that I believe it necessarily, the MMO thing I mean, it's just that the case for it looks so pretty on a spreadsheet. I sometimes read the words of incredulous young men in threads who claim that creating another MMO to compete with their existing proposition is "loudacrous," when it's actually the only thing they can do.

It may be difficult to imagine that the Massively Multiplayer RPG that was referenced on South Park will one day lose its cultural cache, but like inexorable winter that time is fast approaching and it must be prepared for. You may be certain that Vivendi Universal, the company that actually owns Blizzard, would like to continue seeing profits of this kind - and software you don't rent from them on a monthly basis ain't gonna cut it.  I linked an interview with NCSoft's Richard Garriot once about the inevitability of "churn," a corrosive force that is simply endemic to the genre. Their approach to this dark energy is to create more games, each successive game being easier to create as a powerful suite of shared tools are put in place, so that when a player closes one account they just open up another account with the same company. That's why there's no "Station Pass" for NCSoft titles. They don't want you playing more than one. They want you moving with full focus from one game to the next, travelling from one end of their flashing lure to the other, paying the appropriate fees.

Picture a man who has crawled up a long tunnel, wet and ridged, to lie panting just outside its mouth in utter exhaustion. His strength regained, he sees a familiar door and steps within, only to tumble town another slick gullet into the same squeezing, subterranean belly. Loudicrous, indeed. For the businessman, this dark scenario is almost pornography.

who will you choose?