We never sit down with the firm intention of making another Bioshock comic - indeed, we intend the opposite - but somehow Bioshock comics continue to be written. One day, science will pierce these mysteries. Until then, you'll simply have to endure more strips regarding interactive storytelling's electronic opus. 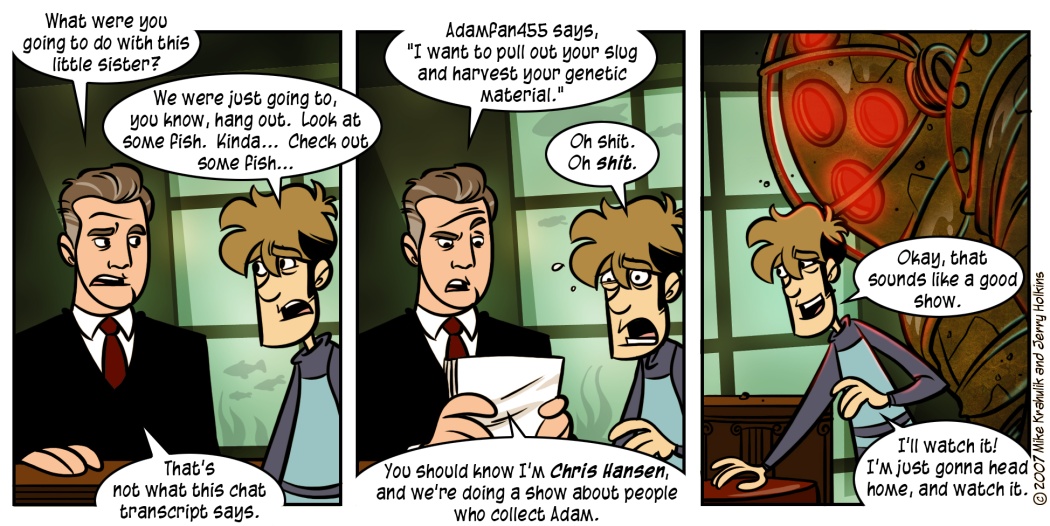 My recovery from this weekend's rigors would be quite accelerated if I were not up until two or more every night, which is to say morning, hacking and slashing my way through the new releases like some malarial jungle guide. I put Bioshock to bed last night, and theoretically this should be cause for joy, but I suppose it's like finishing a pie. There is a whiff of accomplishment, semisweet - but the pie is gone.

Without pause, I slapped the input stud on the video switcher before the final cinema faded to black. Hurling the gamepad into a knitting basket, I dug deep into the faultlines of the couch, producing a wiimote/nunchuk pair. I've now played enough of Metroid Prime 3 to know that they've washed the filth of Red Steel completely from the system. For awhile, I was doing that thing we sometimes do, playing until "the next savepoint," which so frequently becomes "until the savepoint after that," only to meld seamlessly into "until I can no longer see."

They've been spinning the tumbler at Retro for awhile on this one, trying to define first person on Nintendo's weird little chimera, and they've drilled down with enough diligence to find it. No doubt some measure of the enthusiasm directed toward the game is due to the fact that people are actually using their Wii again, but that shouldn't diminish what they've done.

People have seen Corruption for a couple years, now, builds that bubbled up at different press events, and it's been slightly different each time. I think they've moved some of the interactions since I last played it - things that were mapped to the nunchuck's gyro before are now handled by the wiimote's pointing device, and I understand why. Gestures are a very immersive, intuitive means of interaction, but when they fail (or when they fail to express us correctly) they are Goddamned infuriating. In a case when your hand is actually "present" in the simulation - such as when your left hand is pulling, then twisting, then pushing forward - those motions need to be as authentic as possible. They must have chosen the perfect translation of the pointing device over the more "correct" left hand interaction. It creates situations where you are using a different hand than your character, but because the motion is really one to one it still feels pretty good.

That's the long way of saying what you could learn in five minutes, sitting in front of it. This entire exercise has only stoked my ardor. It is my intention to begin playing this game at ten, and continue doing so until light begins to creep under the curtains.

the whirr of the servos inside