Orcs and Elves for the DS has a fairly strong mobile heritage, which is to say that some of its presentation is a little two-frame and raw. If you crave gold and adventure - a common affliction among our people - I think you'll slip past it, and into the retro dungeon crawler at its heart. It's been reviewed much better on the mobiles than it has been on the portable, but I imagine that people who review games that you play on a phone have a more forgiving palette. 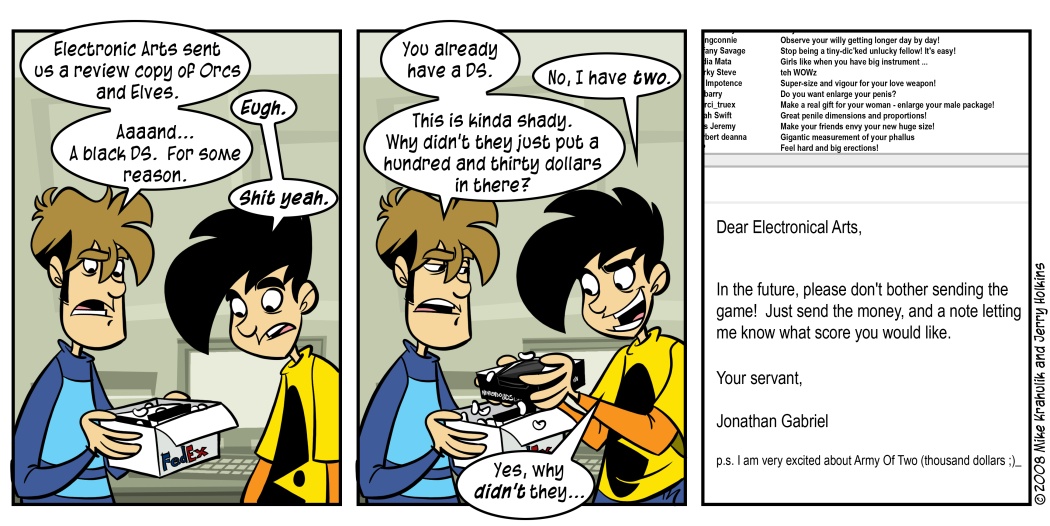 We received the game in a large box that included several tiny wands perfectly sized for squirrel wizards, a black Nintendo DS, and a letter. These boxes are often accompanied by "letters," but these letters are not actually correspondence. We've been trained by years of these packages to roundfile the entire toxic husk, everything but the nut. Atlus sends nothing but the disc, and only the most rudimentary kind of extra information in a nondescript mailer, whose lean efficacy always lead me to believe their PR people were once forced to write reviews themselves.

We didn't even open the DS that Electronic Arts sent. If we had, we would have seen that it was being offered up as an auction for Child's Play. It was, in fact, a Nintendo DS signed by John Carmack. As I said, we didn't even open the thing. If you have been doing this for almost a decade, as we have, you develop a very comprehensive and far reaching cynicism that applies to anything that a company sends you. We arm ourselves in this way because we think it will make us deliver you a more robust assessment of the medium. Also, we are assholes. Professionally.

What I am trying to say is that we fucked up bad. Bad. We actually sent that DS away as a prize in Gabriel's revolting cookie contest this morning, and pawing through the entrails of the box we found an absolutely genuine letter of support for both the site and for the mission of the charity. There is a portion of the letter dedicated to his pride in the game's custom wand-shaped stylus, and if you take pride in custom wand-styluses what that says to me is that you are a huge nerd. This was not some vile and crass manipulator. He wasn't trying to fly me out to gay Paris. He used his position to secure something incredible for the charity, and believed that I would be literate enough to read the enclosed letter. He was wrong.

i didn't mean to tell you lies