We should have a podcast for you later today that goes into the process behind this strip, but the inspiration is probably well known: the tawdry rutting of franchises that leads to medieval swordspersons fighting teenaged elves and starborne Jedi masters. 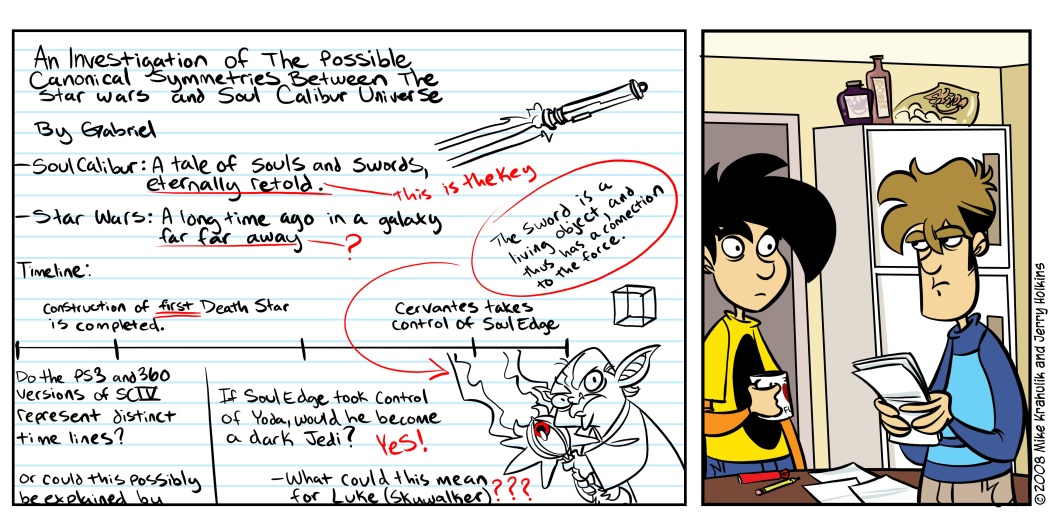 The urge to create stable frameworks and legitimize our fantasies, to make them internally consistent an therefore more real is something we've poked at before. I can't resist it. I always feel the strong compulsion to build upon whatever I enjoy, to understand it better. I can't listen to a song without harmonizing with it, and I can't play a game without imbuing it with sheaves upon sheaves of personally relevant contextual information. I don't know what the origin of this process is, though Gabriel seems to share it as well. It was important to me that my Legos had a clear understanding of their purpose. And it was crucial that the "transformation sound" be produced during a robot's entire transformation.

Part of the reason I quit World of Warcraft before was that my son had been born, and I didn't have the time or the money to play it. But it was also that the style of my play had become something I no longer enjoyed. There is a very mechanistic way to go about your business in WoW that is deeply counter to my nature. I like discovering my entertainment via an intuitive process, and it seemed to me that the game was essentially "about" running Molten Core over and over again to get a complete set of of numerically maximal lootz. I could see this point approaching, like the bright eye of an onrushing locomotive, and decided that I would rather slam my dick in a car door.

I'll never be incredibly decked out. I'm not going to run an instance over and over to complete a set of anything, for canonical reasons and also because I respect myself. The game now has reverted to what it was: an opportunity to play cooperatively with friends, at my own pace, and to chronicle the game events in such a way that they present a sensible narrative. This mental process feels like a kind of masonry, and it improves my enjoyment of the game immensely.

In my guise as Harridan, I'm constantly being hit on by dwarves for some reason. I don't know if it's the ash from the forge, or what. It's like some kind of aphrodisiac for them. Also, young paladins often want to "hail" me, winkingly, when I'm at the anvil.  Look, I understand this.  But I'm still mad, for some reason, and the source is twofold. One reason is entirely OOC:  it's like... "Hail"? Paladin, please. You're going to have to work harder than that. And second, this guy is like level seventeen.

When you talk to me, soldier, you salute.

i knew he was not lying