I don't know if I would attend CES again. If any of you have wondered, as I did last year, whether or not you should go, ask yourself this: 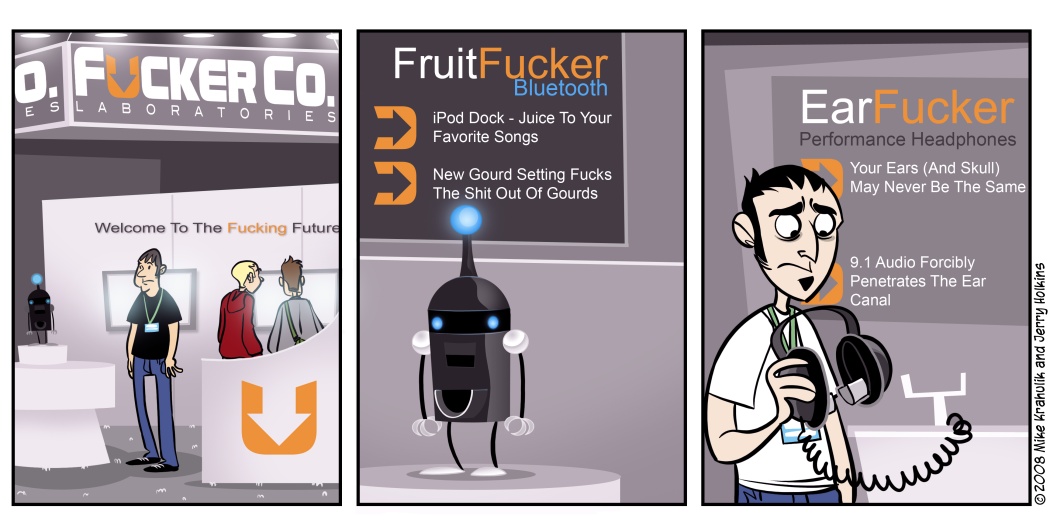 The reason I ask is because that is almost all you'll be seeing there, and even if you see another class of product it is likely to have a flatscreen television built into it. Thousands upon thousand of flatscreen fucking televisions. You won't see, like, Batarangs. Or grappling hooks. I went there expecting to see the future, or something that looked like the future, or something that I could grasp and point (in the manner of a dowsing rod) at the future, but they've got a tiny subset of the future on display. They don't have the devices you could leverage to stem the tide of crime in your city. They have LCD toilet seats that play MP3s, or wi-fi blenders that play MP3s while you are blending online. Everything has Bluetooth.  It's a show for some other kind of geek.

As a "citizen journalist" I don't ordinarily take this tack, but CES is a case where it's probably best to let trained professionals pan the gold out of a show like that.

- After seven blissful levels of wondering why I ever quit WoW, I ended up on some featureless beach in Feathermoon waiting for some stupid, almost nonsensical drop. After that, I talked to a Goblin whose most pressing concern (in a world whose very crust was cracked by perpetual War) was his tremendous thirst. Would I go and get something for him to drink? I've got water, but he doesn't want it. He only wants to drink the glands of some twelve-foot tall plant man. It's like, listen. This is why people don't like Goblins.

- I don't like to advocate violence, because it argues against the thesis of the site, but Jesus Christ. This man should be loosed naked into the savannah, where wild animals - drunk on his heady bouquet - will attempt to drag him in different directions simultaneously. I'm clearly in the wrong line of fucking work.

- Alex Navarro recently quit Gamespot, but remember: the entire affair with Jeff Gerstmann was only a rumor. We need to wait, as though in prayerful silence, for Gamespot to tell us what happened. It would be irresponsible in the extreme to suggest that his departure was correlated in some way with those events. No doubt a full, accurate, and unbiased account is forthcoming.

trying to touch the exhibits