Unlike most "adventure" games, whose puzzle mechanics are heavily rooted in inventory management, Professor Layton's puzzles are more like... puzzles. It's more Myst than Maniac Mansion. It's true that I've only done about twenty puzzles, so I don't know the game in its entirety. Even so, I don't think you're ever going to be putting different fluids in balloons so you can put them in a mail tube so you can flood a communications room so you can etcetera. 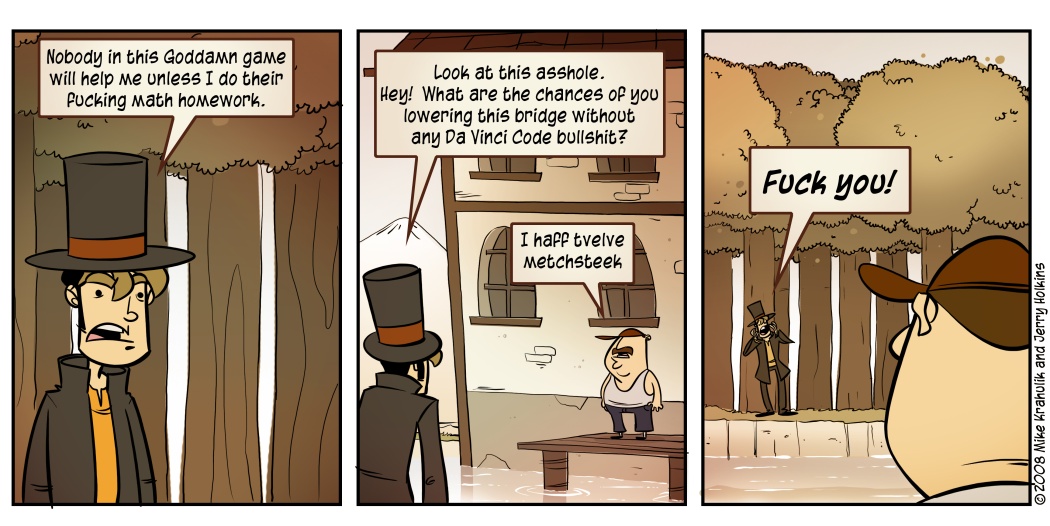 I submit that it is a "Logic Opera." The game is beautiful, things are happening, and let's not forget who made it - Level 5, The Jeanne D'Arc people, the Dark Cloud people, the White Knight Chronicles people. The game isn't making serious demands of the hardware, it's simply comfortable there - happy to be running on it. But every person you meet breaks into "puzzle" the way that viking ladies tend to break into song, out of nowhere, and now you're riddling out some jackhole's insane chicken scratches.

Playing the game in general was, at first, like starting a cold engine. I could feel my mind turn over, and over, and find no purchase. After copious notes were taken and a couple puzzles solved, the fluid in my mind gradually became less viscous. Tuning that system is tremendously satisfying: preparing, mentally, a state that is not blank, but clean - like those model garages they have at the home stores. All pegboards and fresh tools and drawers that glide open with no squeak.

Layton also puts the WiFi to work, dishing up "weekly puzzles" that - if the first one is any indicator - will probably kill me within the month. I stared at these Goddamned matches so long and with such intensity that I began to consider arson.

There is a profane saying, "happy as a dog with two dicks," which is so appropriate at this moment that I have no choice but to utilize it. I play Layton whenever I have a second, it's open and ready so that when I hop on a gryphon I'm already scribbling away with the stylus. But before and after the night's social obligations, and whenever I can jam a game sideways into the work day somewhere, there are probably six games I would love to play. Not want, or like. Love. I have runes waiting in Pox Nora, I bought a deck for Legends of Norrath to play the campaign, and I know that a couple clicks on Armageddon Empires will reliably deliver apocalyptic thrills. I'm one and half games into Culdcept Saga, and already my soul aches to put a Balrog on Boardwalk. Spectromancer, an incredible digital card game that eschews the CCG model, is currently in beta and freely available. I play Devil May Cry 4 instead of eating, content to feast only on demon blood. What am I supposed to do with The Club, Dragon Quest Swords, and Patapon when they arrive later this month?

Could a dog have three dicks, and live?

she once had me