As though fixed to some hissing mechanism, I receive a reliable drip of corporate PR every few seconds throughout the day. It's rare that I find this "content" worthy of you, and so I rarely present you with it. When Gabriel returned, knowing his abiding love for beautiful ponies and husbandry, I presented him with Ponystars - one of the bizarre gems I had sifted out of this endless accumulating ASCII. A product of the reconstituted Acclaim, I was confident the product would ensnare him, because in Ponystars one can: 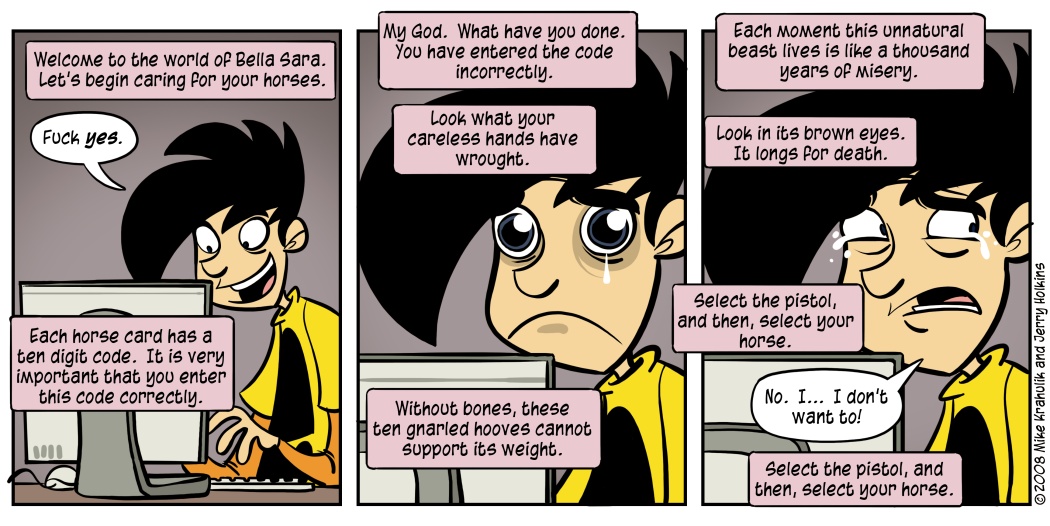 3. Search For The Lost Aurora Ponystars.

Those sound exactly like the kinds of things I would write if I were trying to make up three features, but those items are drawn directly from the game's website. Indeed, the game is a website. I assume this is the version for boys.

I wanted to make sure he was familiar with Bella Sara as well, because it would be a way for him to combine his love for collectible cards with his deep affection for noble pegasi. You should check out the "Getting Started" videos, not only because they are hilarious, but to feel the game's marketing message wash completely over you without effect. Each collectible card has a code on it, this code represents the genetic material of each horse, and it must be entered precisely as it is seen on the card.

I've purchased Age of Conan, installed it, and played it to level five twice now and then pulled myself away. I think that before I really begin something like this, I need to make sure that people know where I'm going, and how long I plan to be there, as though I were planning to conquer some desert summit.

Have you noticed that many sites have been reticent about delivering full-scale reviews? I think its probably for the best - historically, the review would have been based on the beta client, which in this particular case wasn't as robust as the release. These games are constantly in flux. Even WoW, which millions of people the world over consider the finest expression of the form, is a radically different game than the one they launched.

What's more, in a mutliplayer context - where the game is what's taking place between remotely controlled entities - most of the things I remember about massive games are interpersonal. I remember bringing someone who had gotten lost in the Burning Steppes back to the flight point more than I remember most raid content. I imagine the foes of Arcadia found our druidic assault quite memorable. They still wake in the night, I am certain of it, the memory still burning in their breast.

The melee combat system in Conan I find essentially delightful, striking around enemy defenses and kicking off combos, but I know I've hardly seen any of it. I've seen enough, though, to know that the game (with its rich single player introduction and its fast-paced, input-focused striking) has a very natural home on the console.

you bet your pretty neck