This has gotten out of hand. 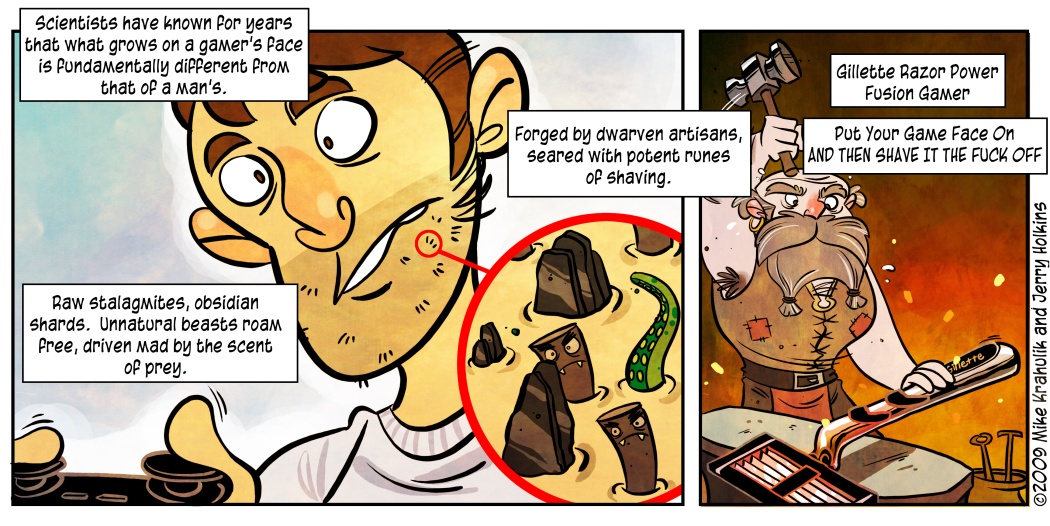 Is there some disparity between gamer skin and human skin, other than its occasionally translucent, grub-like pallor? I think of myself an imaginative person, possessed of an ability to simulate human events with an accuracy so uncanny that men have called it prophecy. I part veils and shit.  But even with the entire universe suspended in the lattice of my intellect, I did not foresee gamer razors. I have begun to feel as though I am being acquired by a sophisticated targeting mechanism; I can feel its beams grazing my occasionally translucent, grub-like flesh.

I spent as much time as I possibly could with Killzone 2 this weekend - not enough to earn anything, of course - but more than enough to know that we are for each other. Accept as a premise that the game is worthy - that there is enough product, executed at a high enough level, to make it a savvy investment from a consumer perspective.

Good, that's done. We may now engage in something approaching a candid discussion.

The Squad system they have in place isn't sufficient for their purpose. Like every other Goddamned thing in Killzone 2, the ability to create a Squad is a feature you unlock. Back when Frank Caron was writing for Ars Technica, he had it nailed to the wall: squadding is too important to have it managed the way it is. Bad Company sets up squads automatically, because they're the difference between winning a round and losing it. When you get (or give) a squad invite in KZ2, there's no way to respond to these requests while in the actual flow of play.  The result is that, often, people aren't joining squads. When you do create a squad, it doesn't persist from round to round. There's also no party system, which would streamline this substantially. This stuff might not be a big deal for the dedicated clans the game was clearly designed to court, but for people who are trying to play a videogame for recreational purposes this ain't cutting it.

When Gabe came into the office this morning, he established that he really wanted to play Killzone with me, but it wasn't listing me as Online for him. He might have assumed that the weekend's intermittent PSN functionality had created this scenario, but the reality is that Guerilla Games did this by design. If you have a friend who is playing Killzone 2 in single player, they don't show in the game's own friends list.  I was only playing the single player because I was waiting for a Goddamned friend to come on!  No, no, and no.

The maps in Killzone 2 are, in comparison to contemporary titles, gigantic - with a verticality can border on dizzying.  I'm frequently amazed by them, but there's eight of these things to learn at once. It's feast or famine at Guerilla Games - they lock away the bulk of their multiplayer classes for all but the most hardcore players, players unlikely to need (strictly speaking) the advantages these capabilities confer, while plunging the entirety of the playerbase into an endless succession of haunted, apocalyptic high-rises and industrial hellholes. People are divided on the topic of downloadable content, but a phased release of disc content - perhaps tracked to an overall killcount - would have gotten the entire community onboard, and kept the game front-page news for months.