In the fourth comic of "Further Songs Of Sorcelation," we posit that bad-ass sorcelator Grimm Shado once banished the Witchaloks to the dark shadows of the Shadowdark. Shadowdark is a word that - like everything else in the series - we constructed expressly to be as awful as is humanly possible. Imagine my surprise when, upon opening "The Manual Of The Planes," I discovered that this is an actual place in the base setting. We decided that this was a punishable offense and, speaking gnarled words that haven't been heard for ten thousand years, unleashed our most powerful techniques. 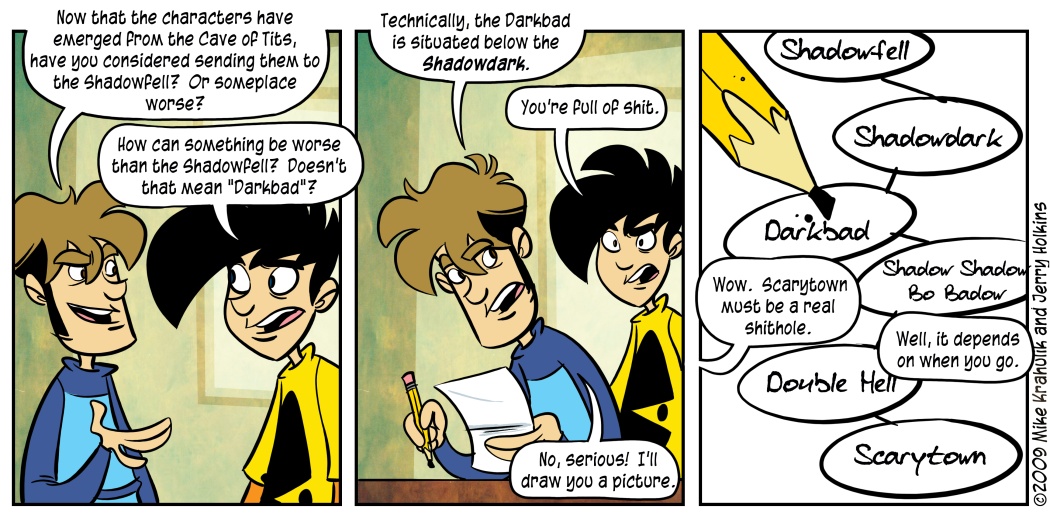 I had a chance to play with his group a couple weeks ago, and I think they're having more fun than established groups. You might be familiar with the term "metagaming," where player expertise supersedes character knowledge in the context of the game world. Gabe's table doesn't have the kind of experience that makes that kind of play possible. As a result, there's a lot more play. In the traditional sense of the word.

Since we only had one copy of the game, our playthrough of Resident Evil 5 was necessarily in the single player mode. Even so, we played it "cooperatively" in the old way, by playing it together and trading the controller. There were fully three times where Gabriel threw up his hands (due to "Bullshit") and I managed to hack through a particular boss to arrive at the next scene. He has more skill, but I have more patience, and eventually some combination of these things brings ruination to our enemies.

We were apparently very lucky with our AI partner, because there were (again) only three times where Sheva produced serious consternation. Just as often, she delivered heals, mixed herbs, and so forth - there was even a portion she managed that we couldn't. She seemed to have serious trouble with a conveyor belt, near the end, but was eventually able to master it.

Playing through it again with Kiko, I'm still trying to figure out how the game isn't scary. I keep reading that it isn't, and everyone seems to agree with this thesis, but no-one ever says why. It's true that the game relies less on what you might call "pavlovian" horror - it doesn't ring the expected bells. There is no haunted house, for example. There is a marked lack of jack-o-lanterns, and black cats are rare. When I run out of ammunition and five men are trying to kill me - one of whom has no head but rather a lashing, six foot trunk of slick vermin, I know that I personally find that unsettling.

once i check my facts