The Seventh Spring continues. I like to write, and do so willingly when I believe it will result in a superior comic. If he's going to turn in work of this sort, however, I think it's best to stay out of his way. These pages would not be improved by my frivolous embroidery. 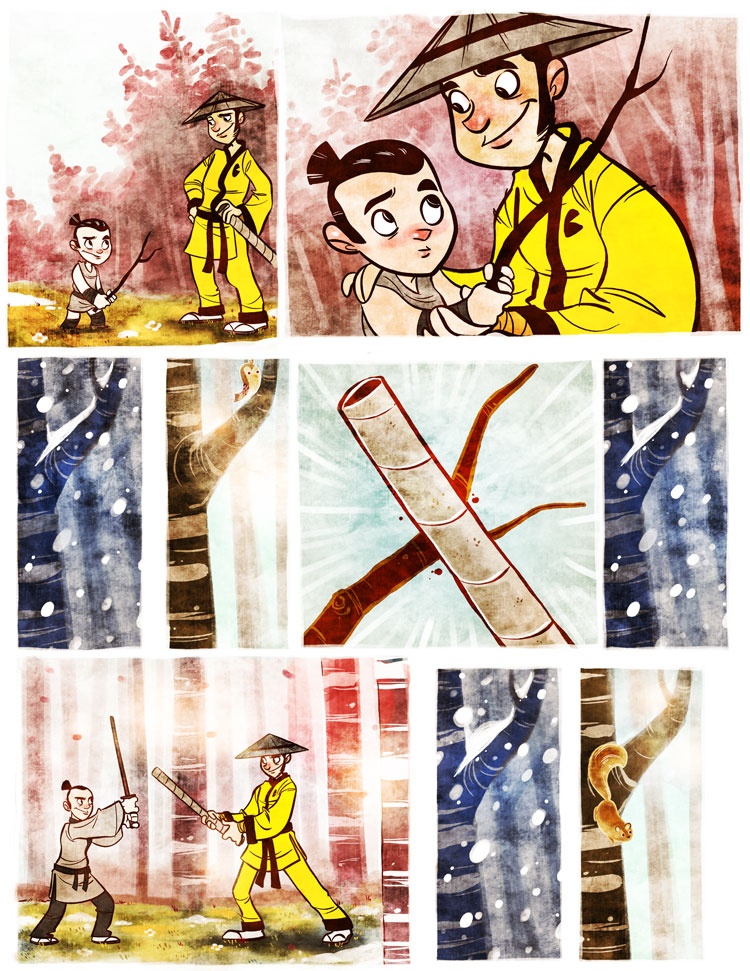 Since the release of The Last Remnant on the PC, I've probably played it thirty hours in total. That's far, far more "value" than I can wring out of most games, but since I'd purchased the Xbox 360 version and been disgusted with it, perhaps we should incorporate this data into our overall value assessment. Even then, at thirty cents per hour, I've more than gotten my money's worth - from a mathematical perspective, at the very least.

The most interesting concept in the game (to me) is the notion of Unions. At their core, a Union is a composite character built from a combination of protagonists or henchmen that acts as a tactical unit. Their efficacy is determined by their Battle Rank, their Equipment, an aggregation of their individual stats and skills, and (my heart is aflutter) their Formation. This last idea is really quite sensual: beyond the raw numerics, you can orient each union toward specific roles. There is the seed here of something with real prowess, but the game doesn't really seize on it fully. It hasn't yet, at any rate.

When my party is completely obliterated - a not uncommon occurrence - I go back to the main menu and load my save. I feel almost nothing when this happens. I don't flex the gamepad, making it a receptacle for my rage. I tried to discern why this would be, and eventually came to the idea that I don't really take any responsibility for my success or failure. Unlike most RPGs, and drastically unlike Tactics games, control over your units is somewhat diffuse. With five unions, each made up of five characters, issuing individual commands isn't really plausible. You get generalized, whole-language commands for entire unions like "Attack using mystic arts!" even if most characters in a union don't have any. You've also got unnecessary poetry like "Save them, no matter what!" or confusing options like "Restore Your Health!" which actually heals other unions(?). There is a map, and unions move around on this map like a tactical game, but if there is a way to take positioning seriously as a calculated maneuver I haven't discovered it. It's certainly a different experience, frustrating if you are expecting something else, but as a metaphor for the chaos of the battlefield it is certainly apt.

I've never found a "boss" or "rare spawn" enemy in the game that I could defeat purely by stratagem - only by more levels.  I'm not saying it can't be done, and I'm not even saying that I mind necessarily: I'm just saying that between the game's reticence to explain virtually any of its systems and the lack of direct orders, I can't really take it personally if I lose.

It's okay, though.  As often as not, JRPGs represent a kind of catechism: a recitation of comforting, accepted truths.  I want some bars to go up while others go down.  The Last Remnant is something I'm indulging myself in, as a purely Calgonian endeavor.  I find it relaxing, even when I have been utterly destroyed.

Episode One of On The Rain-Slick Precipice of Darkness is only ten dollars this week, on Xbox Live Arcade or ninety-nine point nine percent of all personal computers. People are still quoting it to me at conventions, so we must have done something right.