Ever since we saw the first trailers for Free Realms, we've been simultaneously repulsed and fascinated - our rapid travel between these poles has generated tremendous energy. I received a beta slot in an email yesterday while checking my phone, and cried out in triumph - holding the device aloft like some ancestral blade. 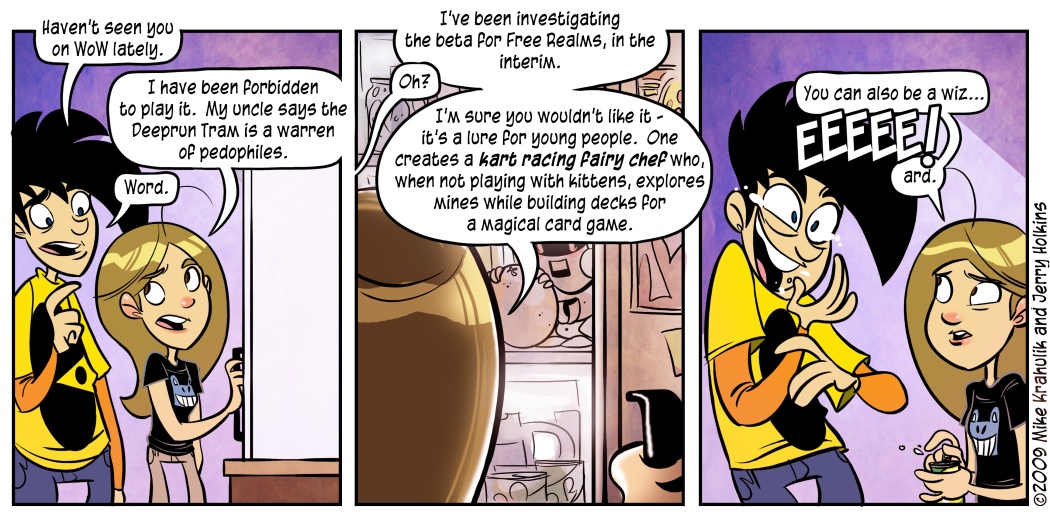 You might recall that Disney's ToonTown developed a certain cache among the hardcore, either as a purely ironic act or because it was genuinely amusing, and there's an opportunity for that here as well. I don't think your guild is going to come over to Free Realms instead of run Ulduar, but that doesn't mean the game shouldn't exist. The breadth of activity they're aiming for is so plucky, so hilariously unmoored that we've kept an eye on it.

The lion's share of play is tied to something like a "class," and within twenty minutes of playing I had a suite of seven such classes I could don at any time - each with custom wardrobes and equipment. It's a game in the Korean style, so you're talking about something that is a) heavily instanced and b) supported by a tiered playerbase that has the ability to subscribe or purchase game content a la carte. Minigames abound, ones you may have seen before in another guise, but it's the meta element (re: Puzzle Quest) that lends them the meaning inherent in a larger structure. It's cute, and perhaps not for every reader of this site, but games that deliver their intention well have no enemy in me.

We installed it at work because we've always longed for a game that blended ninja pets and metallurgy.  Plus, we felt certain it would be profitable from a strip perspective. I installed it again at home because the mining minigame skritches my neurotransmitters and because the fucking card game in this thing has got meat hanging off the bone.

It's got SOE Denver written all over it, and if you're familiar with some of their basic ideas it'll give you a leg up. Mechanically, it's a who's who of every idea I've loved in the genre: the battle lines of an Astral Tournament, the card flip/dice roll mechanic from Sabertooth's Warhammer 40k CCG, and WoW TCG's Quest Cards alongside their own potent bathtub hooch. Compared to the rest of the minigames, most of which follow the form "click here to succeed," this thing is like falling down a well. Fortunately for them, this is a sensation I actively seek out.