Having been delayed in our return flight multiple times, the last time I saw on the clock before I was overcome by sleep was 3:59 in the morning. I didn't recognize my room when I woke up in it. Then, I missed the last couple stairs and landed in a heap. I'm seriously wondering if I will be able to type without injury. 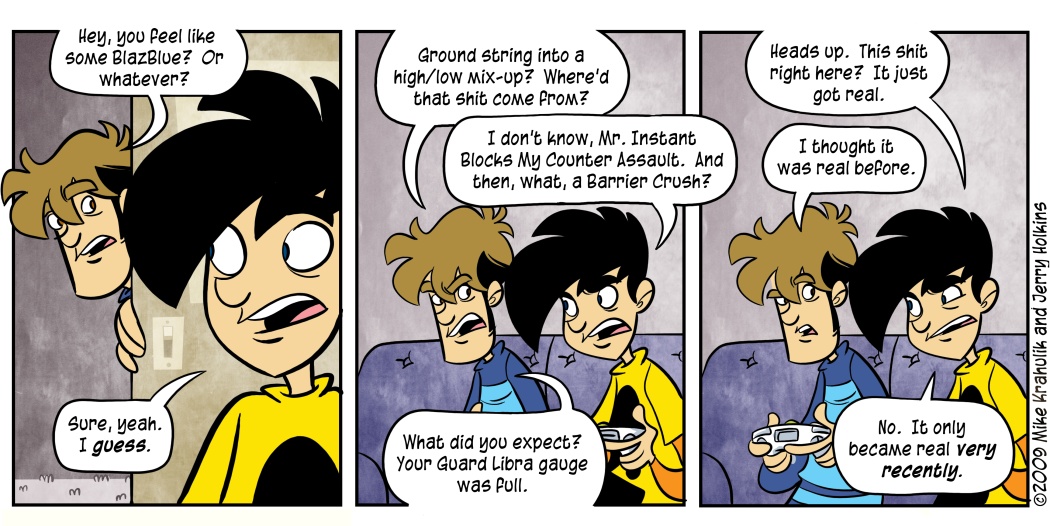 Here is the second BlazBlue comic, though I'm not certain if we're wedded to the idea of a third; it'll probably depend on how much BlazBlue gets played tomorrow, which I suspect will be a lot. Kiko's been in the office virtually by himself the last week, with unfettered access to a DVD rich with advanced techniques to cement his dominion. I pray that Gabriel and I will be able to put our grievance aside while the true threat is neutralized.

San Diego Comic Con was a comic convention, which I have almost no use for, except as a venue to commune with my species and catch virulent memes. Fascinating mortals were in ready supply, and I had a chance to geek to the fullest extent possible on Who and Torchwood: Children of Earth. I have committed many names to memory, and I even miss the show a little bit on the Monday afterward - a first. I could do it again next week, and still enjoy it.

One of the best card games I own - and this collection is substantial, let me assure you - is Quiddler. Situated at a point between Rummy and Scrabble, you draw letter cards analogous to tiles and build words in gripping, successive rounds. It's much faster than Scrabble, and in my opinion more enjoyable, but then I'm really bad at Scrabble so I might not be the person to ask.

A dude from Self-Aware Games dropped by the booth to thank us for allowing ads for Taxi Ball, which I was only too happy to do, because the game is great. In the zone of pure joy that was created by our friendly meeting, he whipped out a couple phones to show off their new game, Word Ace. Similar to Quiddler, it boils Scrabble's bones for stock - but adds Texas Hold 'Em instead of Rummy, replacing the lid and going to "low" for a long simmer. The aroma fills the house. Apparently, I need to eat some Goddamned breakfast.

We played against each other there in Ad Hoc, he on the iPhone and I on a Palm Pre, which made me smile - and I told him so. Something that's been especially disheartening this generation is that fiefdoms have become even more entrenched, even though there are many market players with power spilling o'er the ramparts. He said it may be out next week, which is good, because the constant fantasies are becoming a distraction.