I would say that the pursuit of Sport would, when assessing our oeuvre, appear as a very small word in the resultant tag cloud.  Table Tennis is not a sport, so much as a state of matter; it is, therefore, exempt. 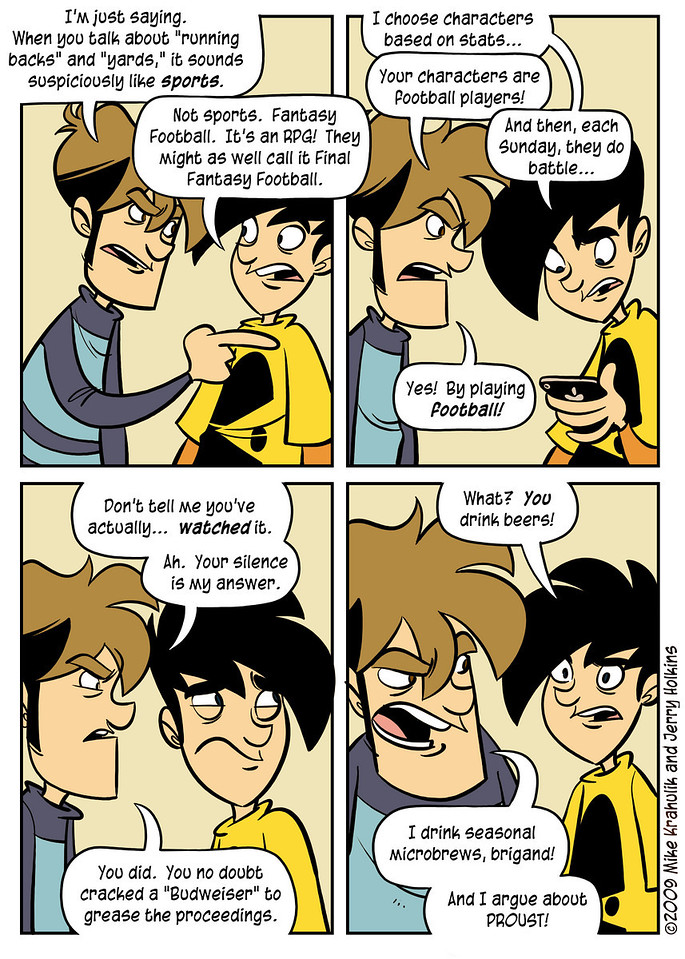 The surprise I felt watching him absentmindedly pruning his roster for Sunday's game went beyond surprise and perhaps wandered briefly into betrayal territory, and the ramshackle nature of his defense only stoked my rage. I suppose in a purely technical sense, Fantasy Football is a stat-driven experience seasoned with strategy and luck, so I should like it.  I love games that interpret data, though typically I prefer a little more interpretation.

I should never have posted a list of any kind that purports to reflect my intentions, particularly on the eve of the Brutal Legend demo, whose full-throated vindication of the product has escalated its necessity. There are also outlier concepts that must be managed: for example, I bought Tales of Monkey Island back in July, but each month a few hours of gameplay are released as a result, as though from Puzzle Prison. The next episode drops on the twenty-ninth of this month, and though there are other high-profile games which share this date, their sheaves must bow. I expect to offer up mea culpas on an almost daily basis to accursed list, which I had intended to be a useful tool, a kind of garden box to constrain my appetite. I should have known from the outset that discipline of any kind is my natural enemy.

I suspect I'm going to be railroaded into buying Cloudy With A Chance Of Meatballs as well, by someone I'm in no position to refuse. Each playthrough of the demo has less flavor than the last, and his agitation is palpable. If you have ever wondered who is buying this shit, well, there you go.  We have no choice.

Halo 3: ODST is Bungie's best Halo campaign, which is to say it's the best Halo campaign in existence. I feel very confident in this assessment. We're somewhat famous for having misgivings about their single-player offerings, having loathed them starting eight years ago, when everyone claimed to like them. Now that Bungie has delivered their most refined, textured single player experience to date, it would appear that some are catching up to us, albeit us circa 2001. In another eight years, when what we believe today is a truth universally acknowledged, I will put my dirigible on autopilot and really settle in for a good laugh. By the time our notion has burst in your loam, you will not remember the source. Indeed, you will call it your own idea: native, and pure.