If you pre-ordered the Nook a sufficiently long time ago, they ship it to you overnight - and Gabriel's arrived at the office yesterday afternoon. As a person with no fetish for technology, the "unboxing video" holds within it no magic; my cohort finds their barely contained eroticism irresistible. We've tried to contain the illicit character of the form in today's strip. The last panel attempts to marry a satirical voice with an assertion of genuine truth, which is that the film that protects our new devices - and the gentle tug, as it resists - is one of this life's great pleasures. 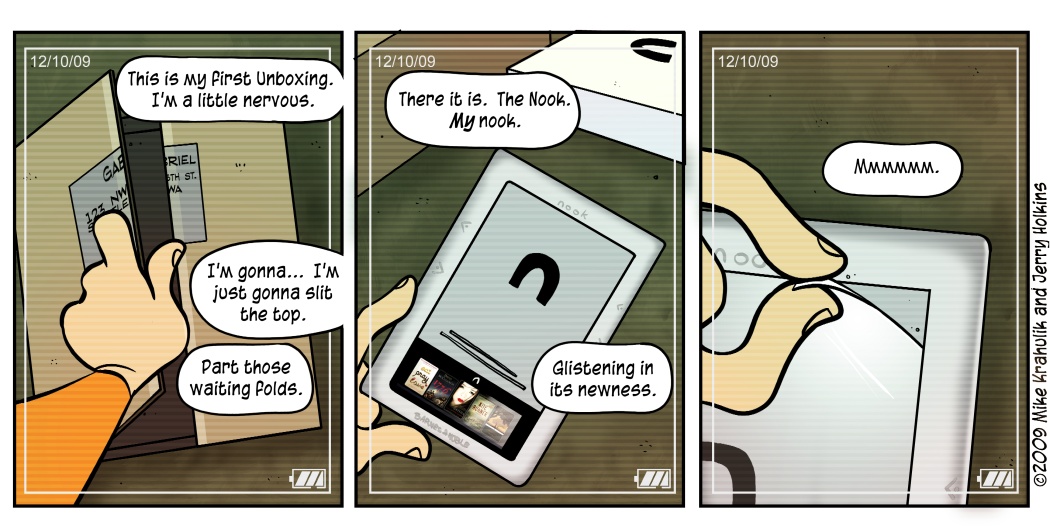 There is a new episode of Penny Arcade: The Series available, which makes this a good time to talk about when you can expect things of this kind. Namely, every Friday.

Friday is a day when all are desperate for amusement, and we have taken up the cause. Each month, you can expect to see two new episodes of Penny Arcade: The Series, in addition to a second show called The Fourth Panel, which foregoes the show metaphor and delivers something more observational - something like a video podcast. Finally, the fourth weekend of every month will be claimed by Scott Kurtz and Kris Straub, in the service of twisted Flash animations which they refer to as "Blamimations." Every time you crave succor, and it is Friday, we should have a video poultice to ease your pain. If you crave succor other days, you are fucked. Get your succor someplace else.

The Child's Play total, as of yesterday, stands at $1,302,367. The dinner was almost shockingly productive, as were the lists, but our task is not yet complete. This year, more than other years, it's crucial that we obliterate last year's total - a sum which taunts us from its lofty perch, crowing at $1,434,377. This amount is our enemy; an index of our old selves, without the benefit of a year's spiritual growth. This year, when conventional wisdom expects less charity, let us deny that thesis and its cynical comforts. Let us, instead, be better than we have ever been before.

My mom came to the dinner this year to help manage my brood, and in exchange for her assistance I accelerated Christmas somewhat, granting her a copy of Zelda: Spirit Tracks blessedly early. She was considering flying back home, but decided instead to take the train, so that she could play her Zelda game, which also takes place on a train.

I got her a DS so that she could understand some measure of my life, and the strange machinery which motivates it, but the result is that I have created a ravening Goddamn monster.

it was never real