Holidays where people exchange thoughtful objects (or those which sport a pronounced turkey component) get a pass, but "enforced revelry" as a general concept is one I abhor. I have an especial loathing for chronofetishism. My prediction for 2010 is that we'll spend the entire Goddamn thing spitting blood and teeth into the sink. Happy New Year. 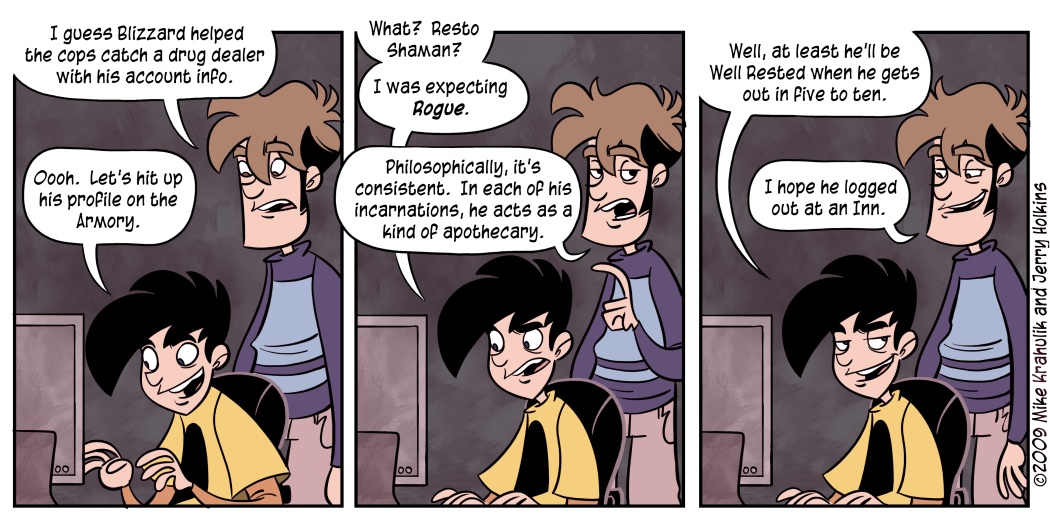 I guess this is a World of Warcraft strip, based as it is on this weird news story, but the weirdness factor extends it somewhat beyond the normal constraints. Essentially, police tracked their quarry in the real word via his avatar, which is about as cyberpunk as it gets. If they had issued the warrant literally inside the gamespace, that would have really clinched it for me - I would swear allegiance to a megacorporation this afternoon. Commentary runs toward concerns and liberties and whatnot, certainly food for thought, but if you are not a big fan of prisons maybe selling drugs doesn't constitute a strong play.

If I have a blind spot in observing the medium as it stands, the most obvious one has got to be Xbox Live Indie Games. The community arbitrated model is interesting, and the storefront is a couple taps of the analog stick from places I already am, but I never made it a part of my "sweep" to sieve that content. Leave Home taught me the error of my ways, which is to say that it made me feel like a villain. A villain with myopia.

It's a side-scrolling shooter. Well, sometimes it is. Sometimes you navigate through more arbitrary space, though it depends on how well you've done up to that point: in fact, almost everything does. It only takes a few minutes to play through the "entire" game, but every time you play the game, it's different. People are always saying that, that their games are different every time you play, when in actuality you're choosing to be kind or cruel to all the same backwashed cast. This may be the first time where that statement is actually true. As a shooter, it's gameplay is always immediate, and whenever you succeed in it, the extent to which you succeeded ramps up what's required of you. Try to imagine that the game I have just described is only three dollars. A link to both the trial version (which will download to your box automatically) and the full version are here.