We put together another Dungeons and Dragons podcast on Wednesday, this time devoted to the resurgent Dark Sun setting. This round saw me behind the DM's screen, doing my best to immolate, abrade, crush, and otherwise destroy our own Gabriel, Kris Straub, and Scott Kurtz. I spent two and half years invested in a Dark Sun campaign as a young man, and the opportunity to revel there again - if reveling is even possible in that blistered psychic wasteland - was an honor and a pleasure. I hope I was able to create in their minds the same deep curiosity about the setting that was, heretofore, my sole domain. 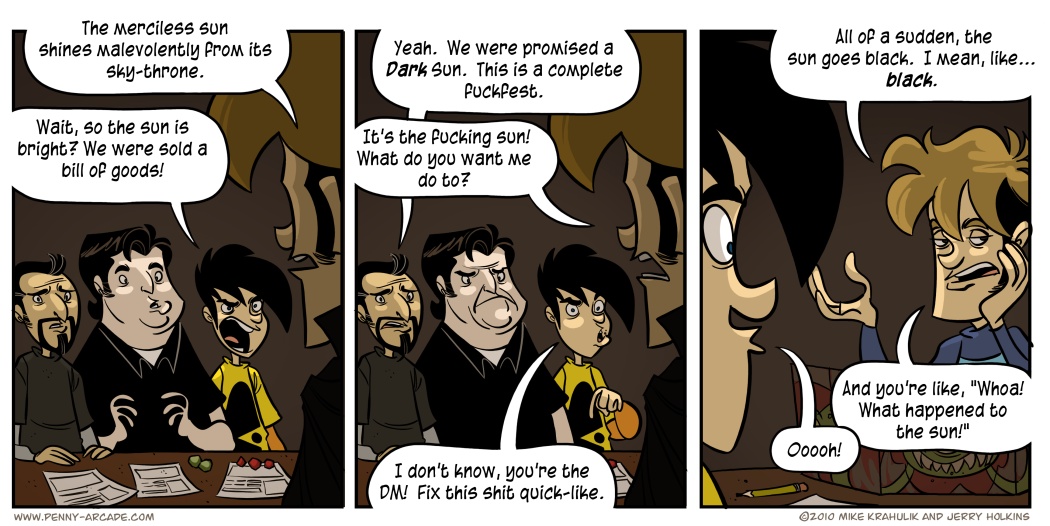 Running a game for three writer/artists was a unique experience, one I'd gladly take on again.  And I'd probably better take it on again, because (as you'll hear in the podcast) I loves me some cliffhangers.

I've tucked away three nights into Lost Planet 2 so far, and I'm slavering with the anticipation of more. I'm in the mood for something that will chew me up and spit me out, difficulty wise, though I should emphasize that being chewed up and spit out is something that can actually happen this game for reals.

I need to stress at a fundamental level that there is nothing factually wrong with Brad Shoemaker's excellent review over at Giant Bomb. I strongly suspect that this game's "idiosyncrasies" are sufficient for huge swaths of the population to relegate it to the Bullshit File, a file which includes such classics as the Castlevania Medusa Heads, which (coincidentally) was the name of my post-funk folkadelic band in college.

Like Resident Evil, it simply controls the way it controls, and it doesn't care if you like it or not. By action game standards it's incredibly deliberate, with four distinct buttons and one click devoted to different forms of movement. That's correct: it's not sluggish, or unresponsive, or anything other ill-spent synonym, but deliberate. This is precisely how they intended the game to control. It must be played thoughtfully, and it will punish you in a gruesome fashion if you swagger in cock-sure, content to approach it as you would the shooter of the week.

For me, it's about what I get in exchange for managing their unyielding methodology. It's simply a fact that if you want to shoot aliens and storm compounds while riding in a robot with three other friends, there aren't a lot of games that will let you do that. There's only one actually, it's called Lost Planet 2, and if you approach the game respectfully - and in good company - the results will surprise you.

If you are enthusiastic about Blamimations - if you are a member of the Blamination - then today is your Cinco de Mayo equivalent.