Gabriel finished his last book during the San Diego trip, and so he's been on the prowl for a new one, which is always a dangerous time. The last one managed to combine: 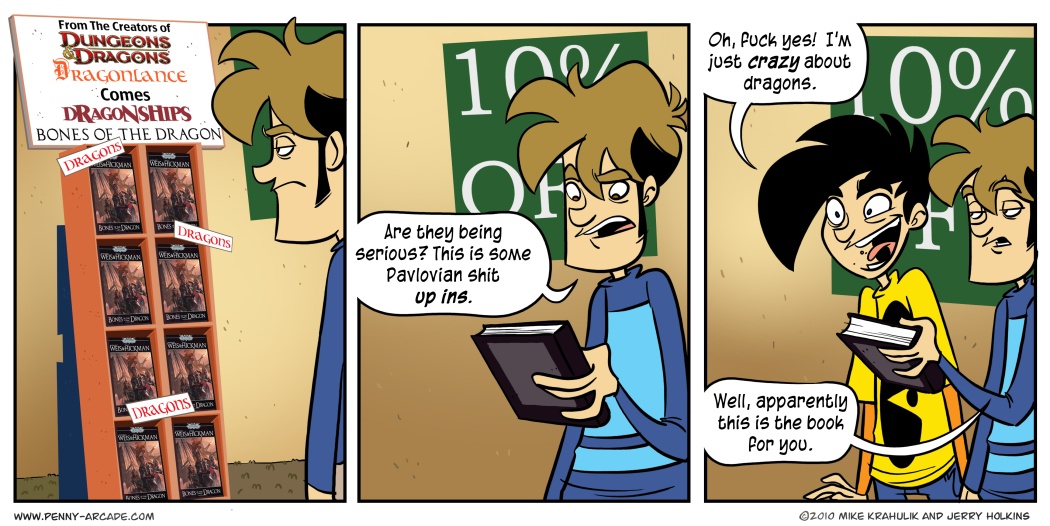 so the bar for thematic density is fairly high at this point. It was in this vagabond state that he stumbled into a new Weis & Hickman book called Dragonships, having enjoyed their prior dragon-related efforts, though you have to admit that these people have maybe cranked the bucket down into the dragon well maybe one too many times.

Because we so rarely attend the larger media events, it wasn't until San Diego that I was able to use the Kinect in any real capacity - broad spectrum use, playing, navigation, and so on. I think it's very interesting, it performed better than I expected, but largely reasserted that hardware is a promise and content is hard currency.

The reason people tend to emerge from a Dance Central experience with optimism is because Harmonix is smart about what they show the player, and what input they use. Kinect can look at objects in a number of different ways - it can recognize a body and find its bones, or it can straight up just detect what shapes are out there - and going by how Dance Central feels to play, it seems as though the game is primarily reading your silhouette. It is not detecting your dance ability with some kind of funkometer, it is looking at the outline of your body and matching it to a pattern at key beats. Is that worse? Maybe, but it's peeking behind the curtain. Is it fun, incredibly fun, as an experience?  I would say yes.

There's definitely magic here, but it's the magic of the Stage, as opposed to the Mystical Talisman. That is not meant as a pejorative construction, or for that matter a Bajorative construction. It's simply what is true. Giving people compelling experiences might require sleight of hand, sometimes. The hardware (in the form it has been publicly presented) is quite good at finding people, and then finding their skeletons, and it tracks them reasonably well but not perfectly - it will trail you during fast movements. I found their Bowling interpretation to be a blast, their track and field Hurdling thing to be decent, and Joyride abysmal. In every case, it had to do with how well the experience was designed to match the hardware, and not the other way 'round. Every genre isn't a natural fit: I think a Kinect racing game could make sense, but Joyride's workaday implementation is the kind of thing that makes you question the entire thesis. As an input methodology, it requires imagination - on the designer's part, as well as ours.

Arena.net, the creators of Guild Wars, are about fifteen minutes away from our office in good traffic. For some reason, this is something I have to remember over and over again. Whenever I see their most recent broadside on the official site - death can be more than a penalty, excessive codification of player roles has stunted the genre, online worlds lack anything approaching true dynamism - I often wonder what the game they're describing actually looks like.

And because they are (as I have just remembered) fifteen minutes away in good traffic, we're just going to go over there and see. It'll be at PAX also, and I had planned to see it there, but I suspect I may be incredibly busy then. I don't know! It's just a premonition.

none of the above