This one hardly needs a preface. Sometimes, the comic is word for word true. 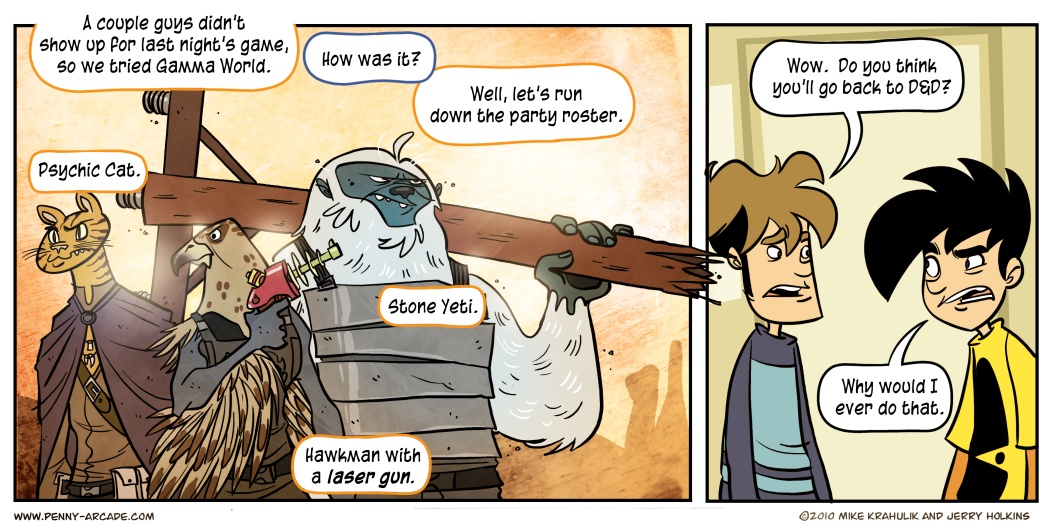 The core story in Gabe's regular Monday game is pretty heady stuff. Characters die, are reborn, mortals are an aberration, their planet is a prison, not metaphorically but physically, that kind of thing. They've been playing for two full years this Christmas, and the things they do and the forces they must contend with have tremendous heft. At what point does narrative gravity become mere weight? As a manufacturer of Narrative Gravity, it's a question I don't actually want an answer to.

Every table has its own culture, and that culture is partially determined by the system in use. There are multiple data channels running as well, with a number of purposes, and varying levels of structure. I've played at tables where anything said is said by your character, and I've played games where that kind of thing is much more loose. I have even played games where we never ended up playing an actual game. Shit, I've run those games. Also, there's games that lend themselves to humor: Paranoia's a classic example of the phenomenon. I think under the right conditions, Bully Pulpit's Fiasco ("A Game Of Powerful Ambition & Poor Impulse Control") could deliver on that as well.

I think part of the reason this particular game worked for them is that it flipped their ordinary table culture on its back. All the stuff that in their ordinary game that would have been second stage material or even a straight-up distraction got bumped to the main stage, and player contributions graduate from being suggestions to full collaboration. It's a game about randomly generated mutants who might roll around in the hulk of a pickup truck pulled by a team of horses. Humor is not a welcome side-effect of the game but something akin to its purpose. Not everyone can drop a soliloquy just bam, lay it right there on the table, but that's what serious games demand from us: risk. Even among friends, that's a heavy load. Here, one of their beam weapons stopped working, and right there at the table they held a kind of burial for it.

I'm not going to say that one game is better than the other necessarily, particularly given my role described above, but some of these games have laser funerals and some don't. So...

how can I feel safe around others