As one of Gabriel's fully actual dreams, this bizarre pastiche was weird enough to record. But now I want to use this character again, to re-enter the Time Files of Bono Trask, even though the workings of his device would almost certainly preclude it. Then I remembered that it was a strip about time travel, a genre where grievous narrative sins are expected and even encouraged. I've already generated no less than three distinct scenarios to shape the inevitable return. I've included exclamation points, to indicate my joy in their construction: 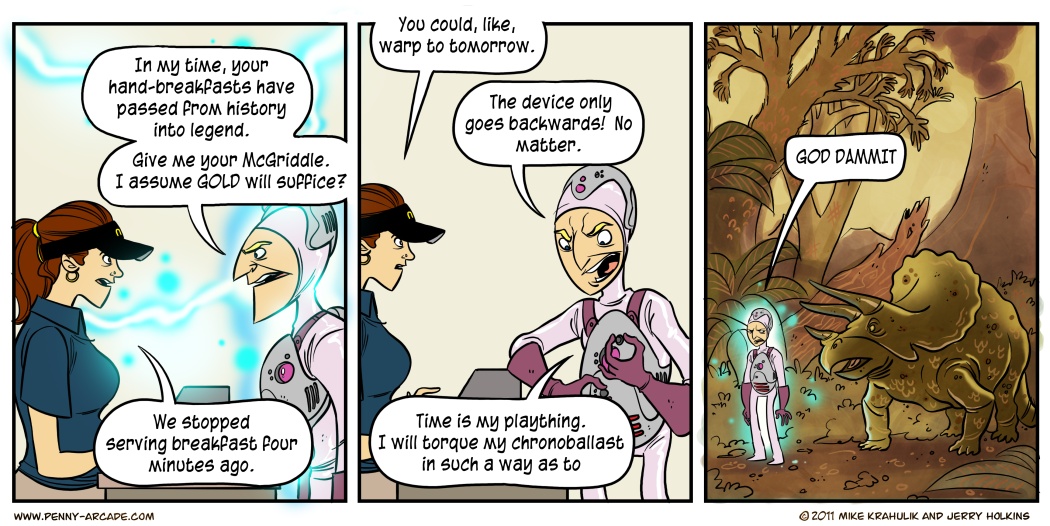 1) One you go back far enough, time just starts over! or

2) The travelator can "bounce" off of "resplendent (that is to say, dodecahedral)" chronofractals! or

Anyway, its a hundred percent sorted; that's the takeaway. I've got it from here.

I honestly couldn't tell you if I turned thirty-five yesterday, or if I turned thirty-five again, for a second time. Until this moment, I believed that assertions to this effect were essentially nonsense. How could you know know? The official answer, the one with the truth in it, is that I don't give a shit. To what end, really, this number. My son doesn't even understand the word; he can count to it, but it represents no authentic locus in a value continuum. Thirty-five is like an aunt that he has heard of, but never met. Brenna got me two featureless black shirts; the ritual has been iterated, and now we may begin on the next thirty-five.

My mind is generally in geosynchronous orbit, watching the unseemly exertions of this body with my metaphorical nose wrinkled in disgust, engaged in cognition about cognition and issuing rudimentary commands over the high-latency link. I wish very much that this last sentence felt less true. In any case, it was never my intention to reach thirty-five, whichever iteration of thirty-five I might be, and I credit my advanced age and onrushing decrepitude to the steady stream of deadlines that have characterized my last twelve years in your service.

Everything is your fault, basically; that's what I'm getting at.