I played Marvel Vs. Capcom 3 at the San Diego Comic-Con what seems like a hundred years ago, and though the roster was a profoundly truncated version of the retail selection, it was very much like what you're playing now: lickety-split full contact puppetry, with shit flying all around. Maybe you're responsible for the shit, maybe not. Maybe the shit happens even if no controllers are touched - I'll test this today. Or maybe you just moved your hands according to the ancient ways, what our people once called a somatic component, and some measure of their magic is made manifest unconsciously. 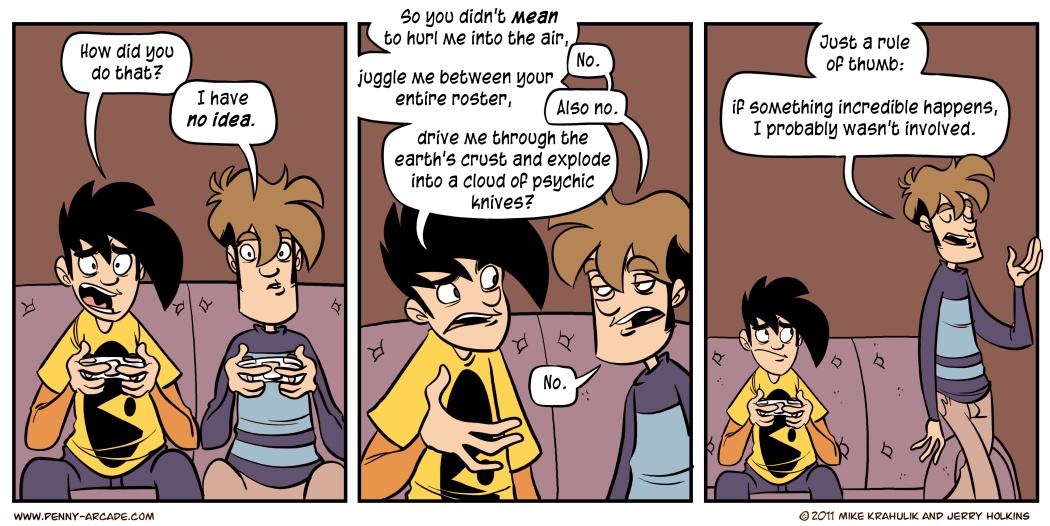 That's how I choose to describe it, of course. Also, I wiggle the stick a lot.

It's entirely possible that, like us, you purchase and enjoy games of this kind. Marvel Vs. Capcom 3 makes it easy for people to experience it at this echelon, because its art, frankly masterful animation, and encyclopedic roster mean that there is plenty of stimulation in all caps to squeeze and prod the brain. Friends will play, or groups of friends, and they may practice enough to beat each other.  Even these people are not playing Marvel Vs. Capcom 3 according to its intention. You can play Slapjack or Euchre with the same deck; that's what happens most of the time.

These people are playing Marvel Vs. Capcom 3. If you want to get where they are, certainly you can start here. That information is likely to help you, no matter what threshold you play at. But anytime you get into the guts of a system, and you start needing specialist language to contain it, that's when my ears perk up. I hope you enjoy that stuff as much as I did, whatever your reason for peeking in.

Something very strange happens when I write about things on the site. In order to package an idea the way I do, I have to expel it; I have to get it out and turn it around so I can see the whole thing. What this often means, for some crazy reason, is that by the time I've expressed something as well as I can about something I find interesting I don't find it interesting anymore. It ceases to be a going concern.

Once I've done it, and the bow is affixed, I can begin dismantling some other personal obsession and offering that one up. Last night, though, our tabletop wargame night showed full well that I've given up internalizing defeats altogether and now behave more or less like a Goddamned child. I held my army bag over the mouth of a dumpster for ten, perhaps twenty seconds, shaking it, but if I'd dropped it in it would have just gotten dirty. I didn't want it dirty! I wanted it OBLITERATED.