It was an act of will to keep from cocking my head at the Beastly trailer, which Gabriel queued up while laughing through his nose. Eventually I had to use my hands to maintain a neutral orientation, but then the urge to knit a scornful brow nudged its way through and everything fell apart. Ugly has received a significant downgrade, or perhaps an upgrade; maybe it depends on what you're trying to determine. 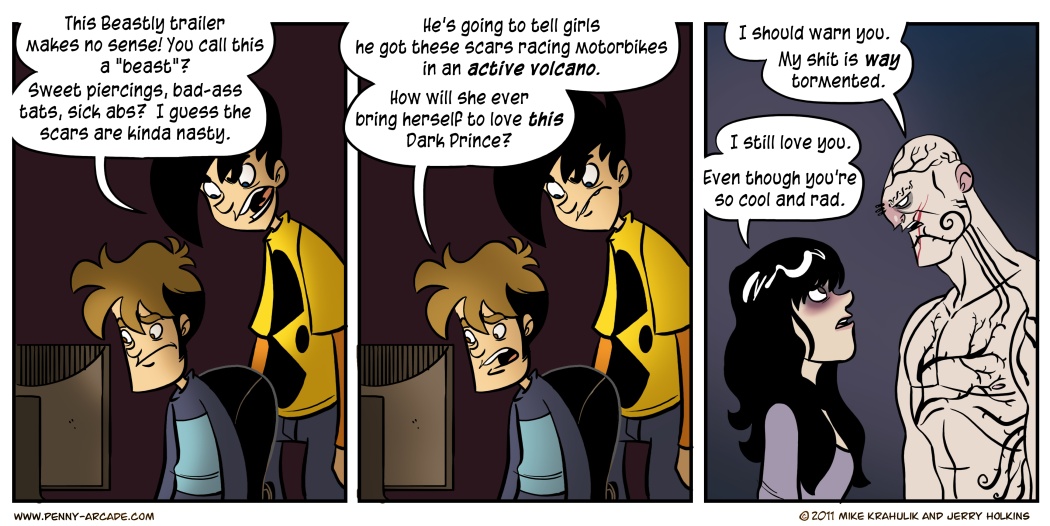 If you're trying to determine if Ugly is a word with a reliable meaning, I might suggest the former.

This "monster" looks like a fairly regular person out of BMEZine, frankly. I don't have an opinion on that continuum of human experience, other than to say that their B is their property and they can M it if they want to, what I'm saying is that the "beast" in this movie only nominally represents something undesirable, and independent of the narrative's candy shell you would have no idea that that this intense fellow was meant to be loathsome as opposed to an eminently desirable frontman astride some gloomwrought fork of Mausoleum Rock.

The first time I tried Bulletstorm's "Anarchy Mode," what they're calling its approach to wave-based cooperative multiplayer, it was with Gabriel before I'd even played the game proper. I had what I knew from the demo, which I had played repeatedly; but those scenarios are fairly constrained and success or failure can be gauged in a number of ways. You can play the leaderboard, you can try to hit a particular star rating, whatever you like.  If you want more levels, you have to succeed in earlier ones - but if you aren't succeeding in earlier ones anyway, maybe you don't really care.

In trying to explain the flow of the game to Brenna, I kept returning to the idea that you as a player (or players) are inhabiting a pinball machine. This is true of the single player, but it's even more true in multiplayer, or in any case it's more obvious: you inhabit purpose-built spaces explicitly designed to expose the game's thesis. But yes, put yourself there for a moment: you play a bumper, and your enemies are an army of chrome spheres which must be used in concert with the environment to succeed. And just like in pinball, it's fun to pound on the buttons and make the ball do crazy shit and to create a tremendous din. But you can also play it purposefully, mindfully, and when you do this it makes the hairs of your neck stand up.

You aren't going to crack waves eighteen through twenty of this thing just sliding around and kicking the occasional mutant. The score threshold that accompanies each round (and gates your passage) makes sure of that. The only way to progress is wring out each opponent for score, and the only way to do that is to communicate with other players. The earliest levels posit fairly workaday challenges, and you'll shred them with little difficulty. I think the challenge could stand to start earlier, because the hard work of meeting them is so satisfying.  I think they should replace the existing demo with one for Anarchy mode - and maybe just start there for the upcoming PC demo.  People would be surprised to see how this "dumb" shooter, which is at the core of so much hand-wringing and garment-rending, can become something bracing and undeniable.

those armies of salvation