As a generality, a game's "writer" has a task similar to a composer for film: they "score" the game, a game that is already in various stages of completion, using language. 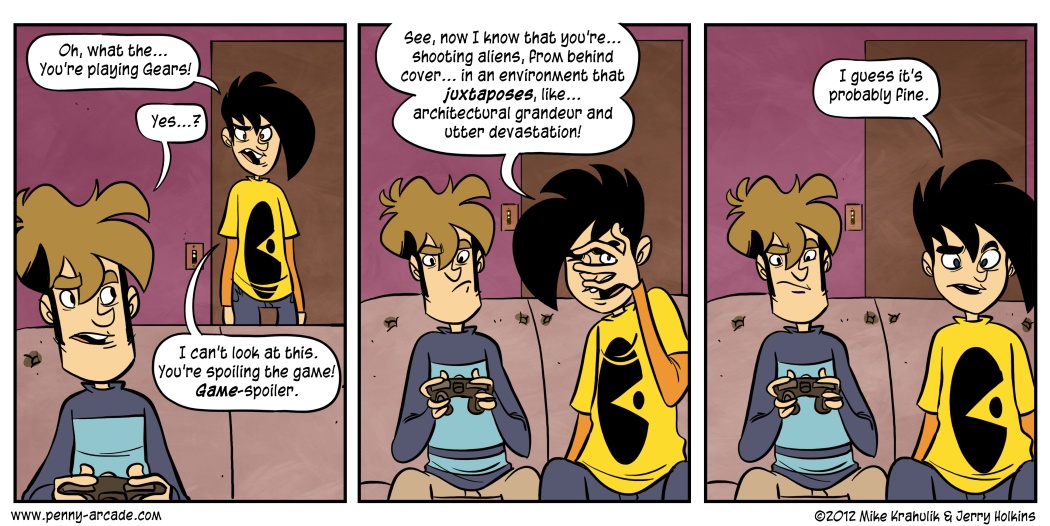 People have an idea about creative works as being inviolate somehow, when it's all just monkeys banging things together. Maybe there's some romance left for the sole operator; that person is welcome to embroider a personal mythology, and you're welcome to buy in. As soon as you rely on any other person to create a work, buckle up. There will come a time - maybe not today, maybe not tomorrow - where you will be up to your ass in blood.

Why are these things done out of sequence so often? Creating content is almost mindbogglingly expensive compared to (for example) a single British lady typing her fucking ass off in the middle of the night, which is her day. There's a reverse engineering aspect to the writing of (most) games as a moment to moment experience. I say most, because I've been to Irrational Games, and I'll be Goddamned if it works that way over there.

There is a story in Gears to spoil, regardless of what the strip may say. It answered a question that I didn't know had even been asked, and it withheld the only answer I was actively seeking. Whether or not you can actually spoil a game like this for Gabriel is another matter: in the same way he is horrified that I can read an entire issue of JLA (let's say) in thirty seconds without looking at a single picture, his ability to glide through a narrative without absorbing it - without getting any narrative on him - is shocking. I honestly don't know how we're able to communicate at all, our experience of consciousness has almost no overlap.

Writers are brought in to the process at various points, so it's not a single model. Richard Morgan wrote what is easily one of my favorite books - Altered Carbon - which (like Brust's Taltos books) talks about how commonplace resurrection alters societies. He also wrote Crysis 2, which I thought I was... fine. But, again: I don't know when they brought him in. Right? They've given him the Syndicate reboot, which given his predilections should be right up his alley, but what is his actual job? Is he making a cake, or is he inscribing the functional, expected, more or less decreed birthday message in ebullient cursive?