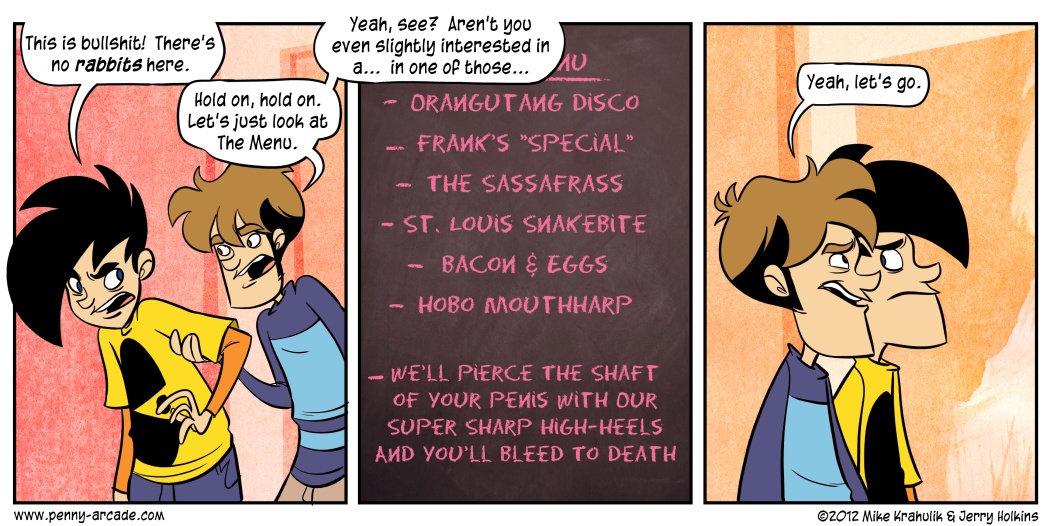 That’s why, at 2:55 PM on Saturday, August 27th, I was more nervous than I’d ever been in my whole life. With a big crowd behind us, cameras rolling, Michelle and I started a new game of Charlie Murder. I brought up the debug menu. My head was spinning. I started overthinking the process of launching the level. The intro scene played some death metal. Is the music going to keep going like this? I thought, death metal is not appropriate proposal music—oh right, it’ll stop. I made sure it stops. Just click the button! I’d done it a hundred times before; this was quite possibly the most meticulously tested sliver of gaming at PAX this year.

The camera panned over. “It’s a Murderfly,” said Michelle. Murderflies are special to us. We hatched the idea of a butterfly with a giant knife at PAX 2009 when we met, then we went on to make our own versions of what a Murderfly should look like. Mine became a boss in The Dishwasher: Vampire Smile and hers adorns the coffee mug on my desk right now. I remade both versions for Charlie Murder; they’re part of the in-game crowd that watches in-game us. There are also a bunch of characters she drew for Charlie Murder and a cameo from the heroes of Vampire Smile. I realized that I was in tears.

In-game me dropped to one knee and pulled out a ring. Real life me, thankful for the cue, dropped to a knee. We were both in tears then. I told her I was so in love with her. “Michelle, will you marry me?” I asked.

She nodded furiously, “Yes!” She was insanely beautiful.

Hand shaking, I got out the ring box. I opened it. She put it on. Everyone cheered! I held her for what felt like forever. We both cried the happiest tears ever.

I won’t lie: the rest of PAX felt a tiny bit dull by comparison. It was an amazing weekend, we met a ton of awesome people, and I became engaged to the love of my life. I’m still getting used to calling her my fiancée.

As I wrote this, she was playing an Indie Games Summer Uprising title on the Xbox 360. She discovered that talking to a cat in Doom & Destiny makes a meow noise, which makes our real life cats freak out, so she just kept talking to the cat until the trial ran out. I love you, Michelle.