Batman: Arkham City exists, and roun' these parts it's getting play for real. We detail what I'm sure is a common problem in today's sequential offering, as there's like four hundred of these fucking things and they're every-Goddamn-where. I have to say, though, that I have a very hard time flying right over this game's plaintive cries; they're authentically chilling, in the vein of Red Faction: Guerilla's awful interrogation. I don't know how they got these sounds out of a person without applying a literal pipe to those areas of the body least able to withstand it. 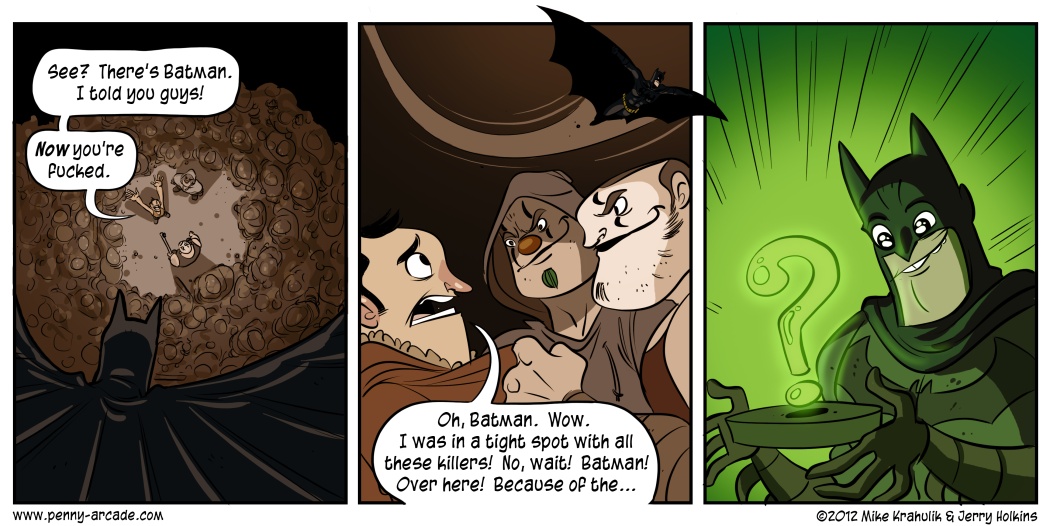 I want the trophy, It's like, yeah, man. No problem. I'll flap down there and press X a couple times, sure.

There was a great article on game-ism awhile back about who the actual "boss" of Batman: Arkham Asylum is, something they've elaborated on a bit in the sequel. I'm not sure you can entirely argue with it: the Riddler is the parentheses that contain the entire story. They found a way for him to be a presence, an infusion, and it works.

We played Arkham Asylum through from beginning to end, the lion's share of it together, and if you can rig something like this up for the sequel I've got to recommend it. We're up to our randomly chosen height indicator with work, all of it interesting, the kind of work a worker craves, but it's going to keep something like that from happening this time. Somebody should do this, though! Might as well be you.

You should do it because when I'm playing it by myself, I'm often asking the pillow next to me on the couch if it "saw that shit," and what its assessment was of the shit. Was it raw? You don't want to be this person. You don't want to be the one attempting to high-five an uncaring lamp, and at the rate radical stuff happens in this game your arm will be perpetually hung in the air in some grim salute. Just moving around in this game is awesome; imagine how great it is when you actually do something.

for all my future crimes